Accession of Burma to the Biological Weapons Convention 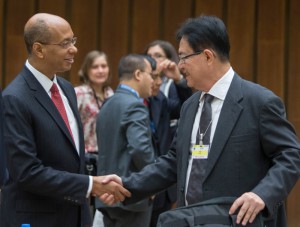 Statement by Ambassador Robert Wood
Permanent Representative of the United States to the Conference on Disarmament and U.S. Special Representative for Biological and Toxin Weapons Convention (BWC) Issues

Mr. Chairman, the United States takes great pleasure today, in the presence of Deputy Foreign Minister U Thant Kyaw,‎ in welcoming Myanmar as the newest State Party to the Biological Weapons Convention, bringing our number to 171.

My Delegation would like to offer Myanmar our heartiest congratulations on taking this important step.

Since the goal of the Convention is the global prohibition and elimination of such weapons, its States Parties have long placed a priority on universal adherence.  We have just taken one more important step in that direction.

Every country that joins the BWC sends a powerful message of solidarity with the international community that the possession and use of biological weapons should not be an option.

It is particularly gratifying that now that Myanmar has joined, all members of the Association of Southeast Asian Nations, a group that has been active on BWC issues, are States Parties to the Convention.

Should Myanmar so desire, the United States stands ready to assist with implementing the Convention in its domestic laws, regulations, and practices, and in other BWC-related areas.