Strengthening the Role of Health Systems in Responding to Violence Against Women
By U.S. Mission Geneva
9 MINUTE READ

Addressing the global challenge of violence, in particular against women and girls, and against children 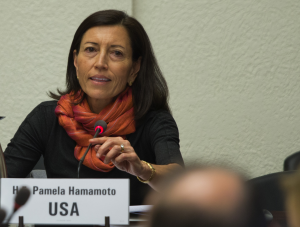 Good afternoon. I am pleased to join you today, to add my voice to yours and to speak out against the horrible scourge of violence against women.  Working together we have succeeded in raising awareness about this global pandemic.  Increased awareness is important, but at the same time, there is so much more work we must do to put an end to violence against women.

WHO and health sector work on violence

As we have heard from Dr. Bustreo and Ambassador Van Schreven, violence against women and girls is a challenge that touches every country and every part of society. Violence against women is a public health challenge, it is a gender equity challenge, and of course, violence against women is at its core a challenge to human rights. The United States is proud to have partnered with the other countries on this panel today and with many others to sponsor the World Health Assembly resolution on strengthening the role of the health sector in addressing violence. Health is one of the many sectors that we must strengthen as we consider national action plans to break this cycle of violence.  This resolution is historic in the depth and breadth of its recognition of violence as a public health problem. It recognizes that countries need to address all types of interpersonal violence in a holistic way in order to make the most impact on communities, and the resolution underscores the linkages among violence, health and human rights.

The resolution also underscores the unique and important leadership role that the health sector, and crucially WHO, has in addressing this global pandemic, in particular through the new global action plan that will be developed with full participation of Member States over the next eighteen months.  While the global action plan will cover all interpersonal violence, we believe it is very appropriate to focus particular attention today on the role the health system can play in addressing violence against women and girls.  Women and girls face specific challenges, including within the health system itself, in receiving the care and support they need after surviving violence or abuse.

I am excited to be here today because I believe this meeting represents the next step in our common vision – to one day raise our children in a world free from violence.  That vision will require a societal transformation. And we believe the health sector is well positioned to champion that vision by taking the message that “violence is preventable” to governments, to policy makers and to civil society at every level.  It is through this engagement, based on evidence and sound science, as well as the millions of daily interactions between care providers and people, that societal change is possible.

The United States has made great progress domestically to prevent and respond to violence against women and children. Yet the problem in our own country remains urgent. In the United States, every day three women are killed by intimate partners. One in five women has been a victim of rape in her lifetime, and one in three women has experienced some form of abuse by an intimate partner.

Thirty-five years ago, in 1979, “violent behavior” was identified as a key public health priority by our U.S. Surgeon General.  Since then, several key pieces of legislation have laid the foundation for our national response to violence.  One of the most important was the Violence Against Women Act (VAWA) in 1994, which led to the improvement of services and provisions for survivors across sectors, from health to criminal justice. Crucially, this legislation also expanded the national infrastructure of emergency domestic violence shelters.  The Violence Against Women Act changed the lives of millions of people in the United States, as each year we fund a national network of shelters and advocacy services.

Since the passage of the Act, annual rates of domestic violence have dropped by more than 60 percent. President Obama reauthorized the Violence Against Women Act and expanded the law to better target high rates of violence among young adults, the LGBT population, Native American women and girls, and immigrants.

But as I said earlier, there is continued work to be done. For example, the White House recently launched a task force to address sexual assault, focusing on a few key areas including sexual assault in the military and sexual assault on university campuses.  All across America, people are publically discussing the issue of violence against women.  How can they not?  When one in five women has been a victim of rape this is a personal issue for everyone. Just as the Violence Against Women Act changed the culture around domestic violence in the United States, we believe our recent measures will change the culture around sexual assault.

The repercussions of violence are not limited to physical injuries.  Violence is a chronic health issue that can lead to asthma, depression and other behavioral or psychosocial health issues.  Violence increases the risk of non-communicable diseases and sexually transmitted infections, including HIV/AIDS. These short and long-term health issues can be the result of direct victimization or from witnessing violence.

The prevention and mitigation of violence depends on the protection of sexual and reproductive health and reproductive rights.  I think it is worth spending a few moments to discuss the connection between a particular health challenge –HIV/AIDS – and a key population that often gets passed over – adolescent girls.

Internationally, the President’s Emergency Plan for AIDS Relief, or PEPFAR, has made addressing HIV/AIDS among adolescent girls and young women a priority. In order to achieve the AIDS Free Generation that President Obama and many other leaders have called for, we must  significantly reduce the rate of new HIV infections among adolescent girls, young women, and other vulnerable populations.  And to reduce the rate of new infections we must increase their access to lifesaving HIV services.  Among all key populations, young women in sub-Saharan Africa are by far the largest group with a disparately high risk of acquiring HIV.

Gender-based violence and HIV are intricately linked. Girls who experience violence are three times more likely to have an unwanted pregnancy, and up to three times more likely to have HIV or other sexually transmitted infections.  HIV is the leading cause of death in girls ages 15-19 in eastern and southern Africa.  In southern Africa, it is worth noting that interpersonal violence is the number two cause of death after HIV.

Through PEPFAR, the United States is working with partner countries, the Global Fund to Fight AIDS, Tuberculosis and Malaria, other multilateral partners, and civil society groups to address gender-based violence and HIV prevention for adolescent girls in a holistic manner. This means bringing together many relevant approaches from multiple sectors– education, health, economic, and psycho-social– to establish a core package of evidence-based interventions.

One example of this is PEPFAR’s engagement as a founding partner of “Together for Girls”– a ground-breaking public-private partnership that seeks to end violence against children, especially sexual violence against girls. To date, with PEPFAR support, eight countries have conducted violence against children surveys for the very first time, and there are plans to expand to ten more countries in the next two years. Better understanding the extent of the problem is a critical first step to finding solutions and, ultimately, saving lives.

Every girl should be able to live her life free of gender-based violence. It is just that simple. Thankfully, through efforts like our collective work at WHO, the world is beginning to shine a light not only on the problem, but also on solutions. We have a long way to go, but if we confront rather than ignore the issue, we can build a brighter future for millions of women and girls.