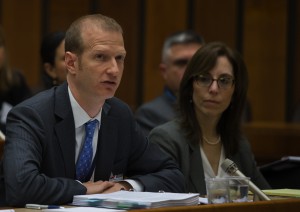 Mr. Chairperson, distinguished Members of the Committee, and representatives of civil society, it is an honor to appear before the Committee today.  My name is David Bitkower and I serve as a Deputy Assistant Attorney General in the Criminal Division of the United States Department of Justice.

The Department of Justice plays a critical role in ensuring that our federal, state, and local government officers protect human rights and uphold our obligations under the Convention.  We do so by undertaking investigations, initiating criminal prosecutions, and filing civil lawsuits.  We are deeply committed to preventing violations of the prohibition against torture and cruel, inhuman and degrading treatment or punishment; to pursuing justice on behalf of victims; and to denying perpetrators safe haven in our country.

My colleagues from the State Department have discussed ways in which the United States has not always lived up to its values.  The Department of Justice has been part of the broad, long-lasting, and comprehensive effort to examine those failures and ensure they do not happen again.  The nation reaffirmed by statute that all detainees must be humanely treated; President Obama issued an Executive Order forbidding the use of torture; and the Department has withdrawn  prior legal opinions that permitted  mistreatment.  The Department’s career prosecutors, acting under both the current Attorney General and his predecessors, also undertook several reviews and criminal investigations into specific allegations of detainee abuse.

We have reinforced our commitment to accountability in other contexts as well.  We have brought criminal prosecutions against those who sought safe haven in the United States, such as Chuckie Taylor, who committed torture and other crimes in Liberia; Sulejman Mujagic, who tortured a prisoner of war in the Bosnian conflict; and Guatemalan soldiers who participated in and concealed their roles in massacres before coming to the United States.  We have prosecuted Americans, including a former United States soldier who was convicted of raping and killing a 14-year-old Iraqi girl and then killing her family, and a CIA contractor who was convicted of brutally beating an Afghan detainee.  And just last month, the Department obtained the convictions of four civilian government contractors for shooting to death 14 civilians and injuring 20 others in Nisur Square in Baghdad, Iraq, in 2007.

Since our last periodic report, we have also made great strides in promoting civil rights and reforming our criminal justice system.  The vast majority of law enforcement officers in the United States perform their jobs with integrity and respect for the communities they serve.  But when systemic problems emerge, and officers abuse their power, the Justice Department uses its authority to implement meaningful reform and hold officers accountable under the law.

In the civil context, the Department’s Civil Rights Division has opened over 20 investigations into allegations of systemic police department violations over the past five years.  During that time, we have reached 15 ground-breaking settlement agreements to implement reforms in these police departments.  In the criminal realm, we have prosecuted over 330 police officers for misconduct in the last five years.

The Justice Department is also continuing its work to prevent, detect, and respond to abuse in American prisons.  In 2013, for example, a Department investigation found that Pennsylvania’s use of long-term and extreme forms of solitary confinement on prisoners with serious mental illness constitutes a violation of the prisoners’ rights under the Eighth Amendment to the U.S. Constitution and under the Americans with Disabilities Act.  And the Department has made great strides to prevent, detect, and respond to sexual abuse in confinement facilities through regulations to implement the Prison Rape Elimination Act.  The Department also is protecting the rights of youth in juvenile detention and commitment systems. As a result of these and other efforts, our criminal justice system is not only more humane, but also stronger and more effective.

Thank you for the opportunity to speak with you today.  I look forward to sharing more examples of the work we’ve been doing over the past five years to implement the Convention and to protect human rights.