Assistant Secretary Malinowski: Torture is forbidden in all places, at all times, with no exceptions.
By U.S. Mission Geneva
5 MINUTE READ 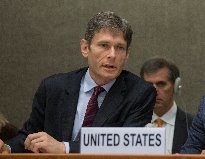 On behalf of the Department of State and the United States, I want to thank the Committee for the chance to discuss our 2013 Periodic Report.  The United States takes very seriously our obligations under the Convention Against Torture and our dialogue with this Committee.  We will address today and tomorrow the progress we have made since our last presentation in 2006, and how  we continue to implement the Convention in improved ways.

The United States was founded on the principle of respect for the dignity of the individual, and no crime offends human dignity more than torture.  The prohibition of torture and cruel treatment is part of our Constitution, and it binds our federal government and all 50 of our states.  We believe that torture, and cruel, inhuman and degrading treatment and punishment are forbidden in all places, at all times, with no exceptions.  The legal and moral argument against torture would be dispositive under any circumstances.  It would not matter to that argument if torture were effective; our experience also taught that it is not.  It not only devastates its victims, but harms people and countries that employ it.  In many places, it is primarily used to coerce false confessions or simply to inflict suffering for its own sake.  Much of the time, as George Orwell once wrote, “the object of torture is torture.”

For all these reasons, the United States actively works to combat torture around the world.  Where we see it, we condemn it.  We urge other governments to cease its use.  We make efforts to sanction those responsible.  We support civil society organizations that campaign against torture, and that treat its victims.

It’s important to stress that we expect others to hold us to the same high standards to which we hold them. And we do not claim to be perfect.  A little more than ten years ago, our government was employing interrogation methods that, as President Obama has said, any fair minded person would believe were torture.  At the same time, the test for any nation committed to this Convention and to the rule of law is not whether it ever makes mistakes, but whether and how it corrects them.  When this issue arose in the United States during the last decade, our democratic institutions worked as designed.  Our free press and civil society led a robust public debate.  Our courts reaffirmed these fundamental protections.  Our Congress strengthened the protections against torture and other mistreatment by an overwhelming, bipartisan vote.  In 2008, Americans of our two major political parties chose presidential candidates who were resolutely opposed to torture.  And President Obama further reinforced the ban in an Executive Order in his first days in office.

As a result, U.S. national security agencies now arguably have more explicit safeguards against torture and cruelty than those of any other country on earth. They can and should be a model for others.

Reporting this progress to civil society as we did yesterday and to this Committee is part of our obligation and another way we hope to lead by example.  We look forward to answering your questions and to hearing your recommendations on how we can deepen  that commitment.

To continue our presentation, I will now turn to my colleague, Acting Legal Adviser Mary McLeod, for her opening remarks.