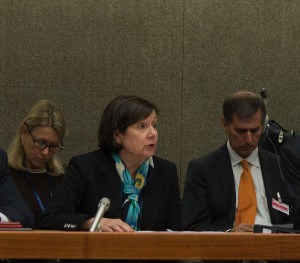 The United States is proud of its record as a leader in respecting, promoting, and defending human rights and the rule of law, both at home and around the world.  But in the wake of the 9/11 attacks, we regrettably did not always live up to our own values, including those reflected in the Convention. As President Obama has acknowledged, we crossed the line and we take responsibility for that.

The United States has taken important steps to ensure adherence to its legal obligations.  We have engaged in ongoing efforts to determine why lapses occurred, and we have taken concrete measures to prevent them from happening again.  Specifically, we have established laws and procedures to strengthen the safeguards against torture and cruel treatment.  For example, immediately upon taking office in 2009, President Obama issued Executive Order 13491 on ensuring lawful interrogations.  This Executive Order was clear:  consistent with the Convention Against Torture and Common Article 3 of the 1949 Geneva Conventions, as well as U.S. law, any individual detained in armed conflict by the United States or within a facility owned, operated, or controlled by the United States, in all circumstances, must be treated humanely and must not be tortured or subjected to cruel, inhuman, or degrading treatment or punishment.  The Executive Order directed all U.S. officials to rely only on the U.S. Army Field Manual in conducting interrogations in armed conflict.  And it revoked all previous executive directives that were inconsistent with the Order including legal opinions regarding the definition of torture.    Executive Order 13491 also created a Special Task Force on Interrogations and Transfer Policies Issues, which helped strengthen U.S. policies so that individuals transferred to other countries would not be subjected to torture.

In addition to these steps, the United States has sought to make its interrogation operations more transparent to the American public and to the world.  We have made public a number of investigations of the treatment of detainees in the post 9/11 time-period.  We are expecting the public release of the Findings and Conclusions of a detailed congressional investigation into the former detention and interrogation program that was put in place in the immediate aftermath of 9/11.  President Obama has made clear that this document should be released, with appropriate redactions to protect national security.
In an effort to ensure that we are doing the utmost to prevent torture and cruel treatment, the United States has carefully reviewed the extent to which certain obligations under the Convention apply beyond the sovereign territory of the United States and is prepared to clarify its views on these issues for the Committee today.

In brief, we understand that where the text of the Convention provides that obligations apply to a State Party in “any territory under its jurisdiction,” such obligations, including the obligations in Articles 2 and 16 to prevent torture and cruel, inhuman or degrading treatment or punishment, extend to certain areas beyond the sovereign territory of the State Party, and more specifically to “all places that the State Party controls as a governmental authority.”  We have determined that the United States currently exercises such control at the U.S. Naval Station at Guantanamo Bay, Cuba, and with respect to U.S. registered ships and aircraft.  Although the law of armed conflict is the controlling body of law with respect to the conduct of hostilities and the protection of war victims, a time of war does not suspend operation of the Convention Against Torture, which continues to apply even when a State is engaged in armed conflict.   The obligations to prevent torture and cruel, inhuman, and degrading treatment and punishment in the Convention remain applicable in times of armed conflict and are reinforced by complementary prohibitions in the law of armed conflict.

There should be no doubt, the United States affirms that torture and cruel, inhuman, and degrading treatment and punishment are prohibited at all times in all places, and we remain resolute in our adherence to these prohibitions.

In closing, we welcome the opportunity to engage with the Committee during this presentation and we look forward to answering your questions.