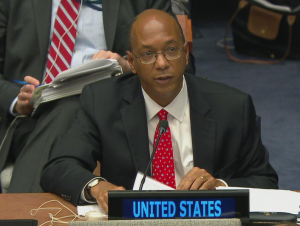 Ambassador Robert A. Wood,
Alternate Representative
Delegation of the United States of America

In June of last year in Berlin, President Obama reaffirmed his commitment to the goal of a world without nuclear weapons. The United States continues to undertake mutually reinforcing steps in pursuit of that goal, knowing that only a balanced approach to maintaining international security will move us closer to the world our President envisioned in Prague and again in Berlin. This requires both strengthening the global nuclear nonproliferation regime and working toward nuclear disarmament. A practical, step-by-step approach to disarmament has proven to be the most effective means to reduce nuclear dangers and fulfill our obligations under the Nuclear Non-Proliferation Treaty (NPT).

We know there are some who have called for alternate, immediate, wholesale approaches to nuclear disarmament. While we aspire to the goal of a nuclear-weapon-free world, we know that real and lasting disarmament will take sustained effort and commitment, requiring us to proceed in a deliberate and step-by-step way. This does not mean we can only take “one step at a time.” We do not have a predetermined set of steps that must be taken, in any specific order, toward nuclear disarmament. Each step builds on past steps and provides a foundation for future action. The temporary inability to make progress in one area does not preclude progress in others or prevent us from putting in place the building blocks for a comprehensive approach to disarmament. We will pursue every avenue available to lay the groundwork for future efforts, but the hard truth is that the final goal of disarmament will not be realized overnight or in a single negotiation. Unrealistic calls for immediate and total disarmament distract from and ignore more achievable and sober efforts. We understand the sincere motivations behind efforts to address the humanitarian impacts of nuclear weapons; indeed, we share the interest of all states in extending the nearly 70-year record of non-use of nuclear weapons forever. But any call to move nuclear disarmament into international humanitarian law circles can only distract from the practical agenda set forth in the 2010 NPT Action Plan. We will not support proposals to set up new UN mechanisms to address nuclear disarmament. Such mechanisms would fare no better because the same political challenges present in existing disarmament bodies would be replicated in any new multilateral body.

Moreover, it is clear that the pragmatic, sustained approach we have taken has borne fruit, and it has achieved major reductions in the number of nuclear weapons, and in fissile material stocks and infrastructure. Despite existing tensions, the United States and the Russian Federation continue to successfully implement the New START Treaty, which is the most comprehensive nuclear arms control agreement in more than 20 years. American and Russian deployed nuclear weapons have already reached their lowest levels since the 1950s. The U.S. stockpile has been reduced by 85% from its highpoint in 1967 during the Cold War. That’s right. 85%. To illustrate this point, we are circulating a Fact Sheet on “Transparency in the U.S. Nuclear Weapons Stockpile” that charts these significant reductions. Each step builds on those that precede it and provides a foundation for those to come. The President has made clear our readiness to negotiate further reductions with Russia of all nuclear weapons, including strategic and non-strategic, deployed and non-deployed nuclear weapons, when conditions are conducive to progress. As we consider arms control priorities this year or in any year, we will continue to consult closely with our allies and partners every step of the way. Their security is non-negotiable.

As emphasized in the 2010 Nuclear Posture Review, the Administration remains firmly committed to maintaining a safe, secure, and effective nuclear stockpile as long as nuclear weapons exist. This includes making needed investments to modernize what remains of the aging and unsustainable Cold War-era nuclear infrastructure. The production complex that used to produce plutonium and highly enriched uranium (HEU) for weapons is now permanently shut down, devoted solely to managing the legacy of past production.

In Prague five years ago, the President called for a treaty to verifiably end the production of fissile material for nuclear weapons. A Fissile Material Cutoff Treaty (FMCT) has long been on the disarmament agenda and is overdue. An FMCT is an absolutely essential step for global nuclear disarmament and the next logical multilateral step to cap nuclear arsenals. This year we engaged in the first two rounds of the FMCT Group of Governmental Experts (GGE). Those discussions were some of the most substantive FMCT discussions in years. We look forward to the final two sessions next year, and we hope the GGE and its final report will advance the prospects for FMCT negotiations in the Conference on Disarmament (CD). The CD, which includes every major nuclear capable state and allows members to ensure their national security concerns are met, remains the optimal place to negotiate a multilateral FMCT. However, when it comes to what is in the best interest of international security, the venue for FMCT negotiations is less important than achieving a credible treaty, and for a treaty to be credible, the states most directly affected by FMCT should be involved in its negotiation.

The United States is actively working to reduce its holdings of fissile material stocks that have been removed permanently from nuclear weapons programs. Under the U.S.-Russia Plutonium Management and Disposition Agreement (PMDA), each side will verifiably dispose of no less than 34 metric tons of weapon-grade plutonium – enough in total for approximately 17,000 nuclear weapons. The United States remains committed to disposing of this material under the PMDA, which entered into force in 2011, and to working with Russia toward a verification agreement for each side’s disposition program. Once disposed of, this plutonium will be in a form that cannot be used for nuclear weapons.

In addition, we have down-blended approximately 140 Metric Tons of U.S. HEU – enough material for more than 5,600 nuclear weapons. As a transparency measure, the United States enabled the IAEA to verify the downblending of over 50 metric tons of this material. In the last year we have also completed the HEU Purchase Agreement’s 500 tons of fissile material.

I would like to underscore that the United States is neither developing new nuclear weapons, nor are we pursuing any new nuclear missions. Stockpile stewardship and management activities are intended only to sustain existing designs, modernize their safety, security and use control features, and modernize facilities. Safety, security and surety updates have contributed to, or will continue to contribute to the significant reduction in our alert posture, and a modern complex will reduce the need to maintain retired warheads as a hedge against problems with deployed warheads. In addition to Stockpile Stewardship and management activities, investments in more modern facilities also benefit a range of activities in nuclear nonproliferation, nuclear security, and emergency response.

We continue to work to build support for ratification of the Comprehensive Nuclear-Test-Ban Treaty (CTBT), making the case to our citizens and legislators that the Treaty will serve to enhance our collective security. We ask for the support of the international community in continuing to build and maintain the International Monitoring System, the International Data Centre, and the On-Site Inspection regime. As we make the case for the Treaty’s verifiability, this support will be crucial.

The five NPT nuclear-weapon states continue to engage on a wide range of topics related to all three pillars of the NPT Action Plan. All five states have now hosted a P5 Conference, the latest this past April in Beijing. At the 2014 NPT PrepCom, the P5 submitted national reports based on a P5 reporting framework, an important first step that illustrates the P5 can work together on sensitive nuclear weapon-related issues, and it shows the P5 made a good-faith effort to implement their NPT commitments. P5 discussions in developing a Glossary of nuclear terms are increasing mutual understanding regarding nuclear employment strategies, and will facilitate further P5 discussions on nuclear weapons and disarmament. The P5 also intend to continue their collaborative work to strengthen critical CTBT on-site inspection techniques and technologies. The United States will continue to do its part to deepen P5 engagement with the goal of advancing progress on our NPT nuclear disarmament commitments and further reducing nuclear weapon arsenals.

The United States continues to implement the 2010 NPT Review Conference Action Plan and strengthen all three pillars of the NPT. In addition to our disarmament activities, we are working with the IAEA and its Member States to strengthen safeguards, to continue our efforts to make adherence to the Additional Protocol universal, and to ensure that the IAEA has the support necessary to fulfill its missions. And we will continue to work with others to resolve noncompliance with nonproliferation obligations and UN Security Council resolutions. Unresolved noncompliance presents a fundamental challenge to all NPT parties and puts at risk the many security benefits compliant states derive from the NPT. It is also time for NPT Parties to come to grips with the challenge of NPT withdrawal, by agreeing on measures to respond to and discourage illegitimate uses of the Treaty’s withdrawal provision.

We are also enhancing support for the NPT’s third and vital pillar, the peaceful use of nuclear energy, not only to strengthen the NPT regime, but to contribute to economic development. In addition to our long-standing support to the IAEA’s Technical Cooperation Fund, we have exceeded our $50 million pledge to the IAEA’s Peaceful Uses Initiative (PUI) before the 2015 NPT Review Conference. At least 17 other IAEA Member States and the European Union have contributed roughly $73 million in financial and in-kind contributions to the PUI since 2010. These funds have supported IAEA projects that have benefitted over 120 countries in areas that include human health, water resource management, food security, environmental protection, and nuclear power infrastructure development. We are currently considering continuing our support to the PUI beyond the 2015 NPT Review Conference and look forward to support from other Member States to continue the positive results achieved through the PUI.

Mr. Chairman, we know that much remains on our agenda, and that the path to a world without nuclear weapons remains a long one. Yet we should not ignore the fact that we have made real progress, and we know what we need to do next to move further down that path. The United States is committed to fulfilling our obligations and working with the international community to take the next steps. Of course, all Member States have a role to play in disarmament, and we look forward to working with you to achieve that ultimate goal.