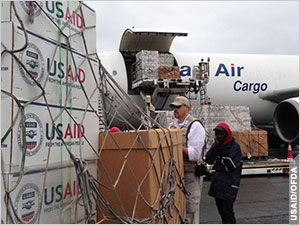 Washington ― On August 24 a flight carrying more than 16 tons of medical and emergency relief supplies landed in Liberia, courtesy of the U.S. Agency for International Development (USAID).

The agency airlifted more than 16 tons of medical supplies and emergency equipment to Monrovia, Liberia, August 24 as part of its ongoing efforts to combat the West Africa Ebola outbreak.

The shipment came from USAID’s warehouse in Dubai, United Arab Emirates, and included 10,000 sets of personal protective equipment, two water treatment systems, two portable water tanks capable of storing 10,000 liters each, and 100 rolls of plastic sheeting, which can be used in the construction of Ebola treatment centers. The critical commodities will be distributed to affected areas throughout Liberia.

“We know that health care workers in Liberia and other affected countries are working at great personal risk to prevent, identify and treat Ebola,” said Jeremy Konyndyk, director of USAID’s Office of U.S. Foreign Disaster Assistance. “The U.S. is committed to working with the Liberian government, in close coordination with our international partners, to ensure that those working on the front line of this crisis get the medical supplies, training and support needed to safely do their jobs.”

USAID, the State Department, the Department of Health and Human Services, the Centers for Disease Control and Prevention (CDC) and the Department of Defense are assisting those countries and international organizations responding to the outbreak. Activities include providing health equipment and other emergency supplies, supporting public health messaging and supplying technical expertise.

In support of the affected countries, the United States has been fighting the West Africa Ebola outbreak since cases were first reported, and it has expanded its efforts and increased personnel in the region over the last several weeks in response to the outbreak’s growing severity.

The United States is working with the World Health Organization, the governments of the affected countries and other partners such as the United Kingdom, France, Germany and Canada to determine the greatest need and to deploy the most-needed resources.

USAID is working closely with organizations such as the International Federation of the Red Cross, UNICEF and Doctors Without Borders to step up efforts on the ground to contain the Ebola outbreak.

USAID deployed a multi-agency Disaster Assistance Response Team August 5 to coordinate the U.S. response efforts in West Africa. Since the outbreak was first reported in March, USAID has committed more than $14.5 million to support the Ebola response.