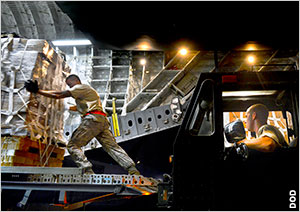 This article was originally published on the Defense Department website on August 11.

Washington — The United States and Britain have flown 14 humanitarian airdrops since August 7 to Yezidi refugees in the Sinjar Mountains in Iraq, a Defense Department official said August 11.

The Yezidis, a Kurdish-speaking ethnoreligious minority group, fled into the mountain area as terrorist forces from the Islamic State of Iraq and the Levant advanced from Syria and northward in Iraq, threatening the Kurdish region. More than 310 bundles of food, water and medical supplies have been delivered to the refugees, providing about 16,000 gallons (60,500 liters) of water and 75,000 meals, said Army Lieutenant General William Mayville, director of operations for the Joint Staff, at a Pentagon briefing.

“In concert with our military partners, the U.S. military is responding to the United Nations security requests of the international community to do everything it can to provide food, water, shelter to those affected by this humanitarian crisis,” he said.

“These airstrikes have helped check the advance of ISIL forces around Sinjar and in the area west of Erbil,” he said.

Damage assessments from the airstrikes are less important than their secondary result, Mayville said, which has been a reduction to the overall threat faced by the refugees and U.S. personnel and facilities.

The current operations in Iraq are limited to protecting U.S. citizens and facilities and U.S. aircraft supporting humanitarian assistance, and to assisting in the breakup of ISIL forces that are besieging the Sinjar Mountains, the general said.

“We’re going to do what we need to do to protect our facilities, protect our embassy, to protect our American citizens, and to reduce this siege, as well as protect those aircraft that are providing support to Mount Sinjar,” Mayville said.

More than 60 intelligence, surveillance and reconnaissance aircraft are supporting coalition efforts in Iraq, the general said, and U.S. airstrikes are providing Kurdish security forces with time to fortify their defensive positions using supplies they have received from the central government of Baghdad. About 50 to 60 ISR flights are being conducted daily by U.S. aircraft, Mayville said.

“As a result, the Kurdish security forces are holding territory in the vicinity of Erbil,” he said, “and it has been reported in the media they retook key communities near Erbil itself.”

While U.S. airstrikes in northern Iraq have slowed ISIL’s operational tempo and temporarily disrupted their advance toward Erbil, Mayville said, the “strikes are unlikely to affect ISIL’s overall capabilities or its operations in other areas of Iraq and Syria.”

ISIL is still intent on securing and gaining territory throughout Iraq, he said, and it will continue to attack Iraqi and Kurdish security forces, Yezidis, Christians and other minorities.

“I think, in the immediate areas where we have focused our strikes, we’ve had a very temporary effect,” the general said. “And we may have blunted some tactical decisions to move in those directions and move further east to Erbil.

“What I expect the ISIL to do is to look for other things to do, to pick up and move elsewhere. So I in no way want to suggest that we have effectively contained or that we are somehow breaking the momentum of the threat posed by ISIL,” he said.

Over the weekend, the government of Iraq and Iraqi security forces re-supplied Kurdish forces, Mayville said, noting that the department is considering additional ways to support the Kurds and also examining the possibility of expanding the support provided by an assessment team in Baghdad.

“We are, right now, gripped by the immediacy of the crisis,” the general said. “And our focus right now is to provide immediate relief to those that are suffering.”