Opening Remarks to Committee on the Elimination of Racial Discrimination
By U.S. Mission Geneva
5 MINUTE READ 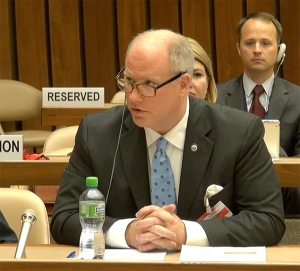 Thank you, Mr. Chairperson and distinguished members of the Committee, representatives of civil society, ladies and gentlemen. My name is Dustin McDaniel. I am the Attorney General of the State of Arkansas. I am honored to participate in this delegation. On behalf of Governors and Attorneys General throughout the United States, I am proud of our tremendous progress toward the implementation of the goals of the Convention. Of course, there is still much work left to be done.

Attorneys General work with each other and with our federal partners so that states may ensure equal economic and educational opportunities and to combat all forms of racial discrimination.
We recently concluded historic litigation designed to ensure nondiscriminatory access to housing, consistent with Article 5(e)iii of the Convention.
When the United States housing market collapsed, a pattern of fraudulent mortgages that targeted homebuyers who were unable to repay their debt was exposed. A global economic crisis followed and more than four million American families lost their homes.

Along with U.S. Attorney General Eric Holder and then-Secretary of Housing and Urban Development Shaun Donovan, my fellow state Attorneys General and I reached a $26 billion settlement with America’s five largest banks related to mortgage fraud.

Minority borrowers were specifically targeted and disproportionately impacted by this fraud, they were more than 70 percent more likely to lose their homes to foreclosure than non-minority borrowers.
To date the settlement has resulted in more than $10.7 billion in principal reductions, allowing families to stay in their homes.

My administration has set a national standard for prohibiting short-term, cash-advance lenders, commonly called “payday lenders,” who target minorities, veterans and the elderly. I am working closely with the recently created Consumer Financial Protection Bureau to create a national standard to regulate these predatory lenders.

The states also work with the U.S. Department of Education to ensure equal educational opportunities, consistent with Article 5(e)v of the Convention.  In the United States, some colleges are now operated by private corporations. Their primary goal is making a profit, rather than providing a quality education.  Some of them target minority students and make false representations about graduation and job placement rates. Students are often left with significant debt and no income.  I, along with 24 other state Attorneys General, am investigating the fraudulent and deceptive practices of these corporations.

Access to primary and secondary education is critical for all students. Therefore, I focus significant resources to education litigation designed to use our court system to end and remedy a shameful history of racial segregation and an inherently unequal school funding system.

Almost continually since 1957, federal court litigation intended to desegregate public schools has been ongoing in Little Rock, Arkansas. This year, the court affirmed the legal and moral accomplishment of ending segregation in our schools. The litigation solidified the state’s commitment to nondiscriminatory policies, ranging from student assignment to discipline.

We also resolved decades-old litigation in the state court system challenging state funding of schools in poor, rural areas, which often had significant minority populations.
Decades of poor policy led to inadequacies that disadvantaged minority and underprivileged students. Today, that litigation is over. Our state constitution and the Convention are being upheld, and Arkansas’s education policy now ranks 5th in our nation, according Education Week’s annual “Quality Counts” report.

Our law now establishes student foundation funding. That means that education funding is no longer exclusively tied to property taxes.

We are proud of the work that we have done in these areas and many more.
I look forward to answering your questions. Thank you.