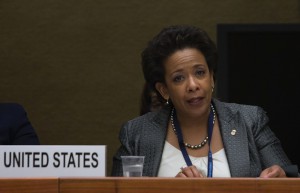 U.S. Attorney Loretta Lynch
for the Eastern District of New York
Delivers Remarks at the Convention on the Elimination of Racial Discrimination

Remarks as Prepared for Delivery

Mr. Chairperson, distinguished members of the committee, and representatives of civil society, it is an honor to be a part of the U.S. delegation and share some of the highlights of the Department of Justice’s efforts to eliminate racial discrimination and uphold human rights in the area of criminal justice.

Attorney General Eric Holder – and all of us at the Department of Justice who work on criminal justice issues – take seriously our obligation to protect the safety of all Americans and the security of our nation; to safeguard civil and human rights; to prevent and combat violent crime, financial fraud, and threats to the most vulnerable members of society; and to strengthen collaboration among government, law enforcement and our community partners.

As part of this mission, the department has made great progress in reforming America’s criminal justice system.   Our focus is not just on the prosecution of crime, but on eradicating its root causes as well as providing support for those re-entering society after having paid their debt to it.

There is, of course, much work still to be done.   Currently our country imprisons approximately 2.2 million people, disproportionately people of color.   This situation is a drain on both precious resources and human capital.   The Attorney General is committed to reform of this aspect of our criminal justice system.

Last August the Attorney General announced the “Smart on Crime” initiative.   Under this initiative, we’re ensuring that stringent mandatory minimum sentences for certain federal drug crimes will now be reserved for the most serious criminals.   This is not an abandonment of prison as a means to reduce crime, but rather a recognition that, quite often, less prison can also work to reduce crime.   We’re advancing alternative programs in place of incarceration in appropriate cases.   And we’re committed to providing formerly incarcerated people with fair opportunities to rejoin their communities and become productive, law-abiding citizens.

As part of this effort, the Attorney General has directed every component of the Justice Department to review proposed rules, regulations or guidance with an eye to whether they may impose collateral consequences that may prevent reintegration into society.   He has called upon state leaders to do the same, with a particular focus on enacting reforms to restore voting rights to those who have served their debt to society, thus ending the chain of permanent disenfranchisement that visits many of them.

To further ensure that the elimination of discrimination is an ongoing priority, the Attorney General has created a Racial Disparities Working Group, led by the U.S. Attorney community, to identify policies that result in unwarranted disparities within criminal justice and to eliminate those disparities as quickly as possible

From the reduction of the use of solitary confinement, to the expansion of the federal clemency program, to our support for the retroactive reduction of penalties for non-violent drug offenders to the reduction in the sentencing disparity between crack and powder cocaine, we have worked to improve our criminal justice system in furtherance of our human rights treaty obligations.   We look forward to the future and the opportunity to do even more.

Thank you for the opportunity to discuss these issues with you.   Our next speaker is my friend and colleague, Mark Kappelhoff, of the department’s Civil Rights Division.