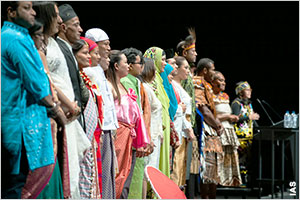 This blog post by David Stanton was first posted on the U.S. Agency for International Development’s Impact blog. Stanton is the director of USAID’s Office of HIV/AIDS.

Ten thousand miles away from Washington, D.C., global health colleagues from nearly 200 countries gathered at this year’s International AIDS Society Conference, AIDS 2014, in Melbourne, Australia. This conference, dedicated to ending HIV and AIDS worldwide, allowed researchers, activists and advocates to share their latest scientific findings and deliver thought provoking presentations on challenges the AIDS community faces. With a renewed commitment to ending the AIDS epidemic, AIDS 2014 provided its attendees and the greater AIDS community with an opportunity to learn from one another and strengthen our AIDS response efforts worldwide.

Here are my five key take-aways from the conference:

1. UNAIDS announced its goal to end AIDS in cities by 2030. In order to achieve this monumental objective and create an AIDS-free generation, HIV and AIDS programs worldwide will need to coordinate their efforts to reduce new infections, stigma and discrimination effectively. Two of the objectives UNAIDS outlined in this goal include having 90 percent of people with HIV diagnosed and 90 percent of diagnosed people on treatment. Although it is an ambitious goal, it is achievable through hard work and collaboration among international researchers, AIDS experts and those working on the ground to fight this disease.

2. The AIDS epidemic can be contained. In the Monday plenary session Salim Abdool Karim, Director of Centre for the AIDS Programme of Research in South Africa, which conducted the CAPRISA 004 trial — which provided the first proof of concept that a vaginal microbicide made of tenofovir gel could help protect women against HIV infection when used appropriately — provided an excellent overview of the history and epidemiology of the HIV and AIDS epidemic (23:50). (The CAPRISA trial was funded in part by PEPFAR through USAID). For many of us who have been invested in the fight against HIV and AIDS since the 1980s, Abdool Karim’s presentation helped refocus our attention on the disease origins and understand how the global AIDS response has developed. One of the most interesting aspects of his presentation was modeling that showed how the AIDS pandemic could be contained. With this encouraging information and a thorough discussion of ongoing challenges in this endeavor, we were able to collectively envision the future of AIDS and the end of the epidemic.

3. Preventing key populations from becoming infected is critical. Much of the conference’s focus was on the prevention needs of key populations (men who have sex with men, sex workers, injecting drug users and transgender people), and on the use of treatment as prevention. But in his plenary talk on Tuesday (1:03:00) Mark Dybul, Director of the Global Fund, gave a very powerful presentation arguing that behavior cannot be overlooked. As Dybul explained, the future of the global response to AIDS will need to maintain a strong emphasis on behavior change practices in order to dramatically reduce the epidemic.

4. “Treatment as Prevention” must be carefully defined. With concerns expressed about the stigmatization of this approach to the AIDS epidemic, Virginia Bond, social anthropologist at the London School of Hygiene and Tropical Medicine, highlighted the importance of rethinking how we communicate about the prevention aspects of treatment. We must be clear that the burden of preventing more infections is not solely placed on infected persons taking antiretrovirals.

5. The needs and complexities of pediatric HIV and AIDS must be prioritized. One of the most engaging sessions of the conference was the presentation on adolescents with HIV. This session highlighted the intersection of working with vulnerable children, pediatric AIDS and the challenges of being an adolescent that has been HIV-positive since birth. Three young people from Thailand, India and Rwanda shared stories of their diverse battles with HIV and the struggles they dealt with throughout their youth. All three lost their parents at an early age. All three are on antiretroviral therapy. For me, the key point of the session was the vital role played by community organizations, social protection and other services for vulnerable children. None of these three young people would have survived to tell their stories without this protection, further reminding us that the success of “Treatment as Prevention” may well rest on the shoulders of community organizations.

The AIDS conference this year was a bittersweet affair. The tragic loss of some of our most distinguished colleagues and advocates cast a long shadow over the event. It is a loss we will feel for many years to come. However, with our relentless dedication to creating an AIDS-free generation and a clear direction moving us forward to meet the needs of those affected by the virus, the HIV and AIDS community is focused like never before.