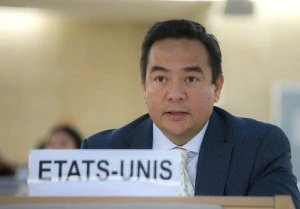 on behalf of a group of states

I have the honor to make this statement on behalf 35 countries.

Improving access to justice and empowering indigenous peoples are critical to this effort.  We recognize that indigenous peoples themselves may well be in the best position to combat violence against indigenous women and girls.  They are closer and better able to address the issue when provided with tools and the legal capability to stop the violence.  We will strive to, and encourage other states to, where appropriate, enable and empower indigenous peoples to better address these issues themselves by providing resources, adopting legislation and policies, and taking other necessary steps in an effort to stop the cycle of violence that affects them.  We also stress the need for coordination and dialogue between state and indigenous justice institutions to improve access to justice for indigenous women and girls and to enhance awareness campaigns, including ones directed at men and boys.

Ending the global scourge of violence against indigenous women and girls will also require comprehensive support services for survivors and improved data collection to illuminate the scope of the problem.  It will demand intensified measures to provide accountability for perpetrators and redoubled efforts to prevent abuse.  It will also entail improvements in indigenous women’s access to birth registration.  Respecting and promoting reproductive rights – including the right to make decisions concerning reproduction free of discrimination, coercion and violence, and access to comprehensive sexual and reproductive health services – must be integral to our efforts to end violence against indigenous women and girls.

We believe the topic of violence against indigenous women and girls requires greater attention.  We encourage the relevant UN mechanisms to recommend ways to use the UN’s existing tools more effectively to prevent and address this serious problem.  We also believe the upcoming World Conference on Indigenous Peoples should consider this problem and ways to heighten awareness and respond to this concern throughout the UN system.  The meaningful participation of indigenous representatives in the World Conference and its preparatory process will be essential in this regard.