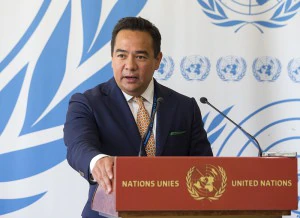 Good morning.  As you may know, I was sworn in as U.S. Ambassador to the Human Rights Council only a few days ago, and arrived in Geneva over the weekend.

I am grateful to President Obama and Secretary Kerry for their confidence in nominating me to this important position, and to the United States Senate for confirming me.

Prior to this position, I was an attorney and represented American Indian Tribal Nations both in court and before domestic bodies and international organizations.  Much of that work was advocacy for the human rights and civil rights of members of tribal communities, safeguarding religious freedom, protecting land and natural resources and holding governments accountable.

Some of my most fulfilling work was right here in Geneva at the UN, representing Tribes in negotiations regarding the Declaration of the Rights of Indigenous Peoples.  That experience gave me a deep appreciation of the work here and just how important it is.  So too, that work solidified my appreciation of the critical role NGOs and tribal governments play in promoting human rights.

Although I’ve just arrived, I thought that it was important to meet with you, the media, on my first day, because you also play an absolutely essential role in telling the story of human rights.

You and colleagues in the media work in an environment that is increasingly dangerous and hostile in many parts of the world.  NGOs report that more than 70 journalists and media workers were killed in connection with their work last year alone.  I know that many of you have personally suffered the loss of brave friends and colleagues.

In our work here, we must never forget our duty to champion the rights of the most vulnerable and to speak for those who have no voice.  Whether those champions are in the media or are those from civil society or human rights defenders, the United States will continue to stand with you.

The Human Rights Council is a critical venue for addressing some of the most persistent threats to human rights around the world.  The Obama Administration decided to seek membership because the United States believes the Council can make a difference.  With U.S. leadership, the Council has responded to urgent human rights situations in real time, shining a spotlight on situations such as Syria, North Korea, Iran and the Central African Republic.

We joined the Council in 2010 fully aware of the shortcomings, including its persistent, structural anti-Israel bias and the fact that some states with poor human rights records gain membership or seek to prevent action.  We are determined to work to address those shortcomings.

The agenda of the 26th HRC Session is an exceptionally full one.  Opening the Council this morning, High Commissioner Pillay described the plethora of injustice and individual human suffering that continues in far too many places around the globe.  I am very pleased to have arrived in Geneva in time to have the opportunity to work with High Commissioner Pillay, whom I look forward to calling on soon.  She has been a committed and courageous advocate for human rights, and a leader on many issues, including pressing for justice and accountability in Syria, Sri Lanka and North Korea, and in defending the human rights of LGBT persons.

The United States has a number of priorities at this session.  Let me briefly mention a few of them.

We will continue to focus attention on violations and abuses of human rights and international humanitarian law in Syria.  The Commission of Inquiry established by this Council will report to us about ongoing atrocities and evaluate the body of evidence it has collected on crimes committed against the Syrian people. At this session, we will be part of a core group working towards meaningful accountability and preventing impunity.

We will also reaffirm the importance of Internet Freedom, through a resolution that will highlight how human rights apply online just as they do off-line.   We are pleased to be working with excellent partners on this initiative, including core group members Brazil, Nigeria, Sweden, Tunisia and Turkey.

The human rights situation in Belarus remains dire. We strongly support the European Union’s resolution on the situation there.

The United States also supports action led by the Africa Group this session on Eritrea, one of the most authoritarian places on the planet.

The Human Rights Council cannot remain silent on South Sudan, where thousands have been killed in ethnic violence since December.  The U.N. Mission in South Sudan (UNMISS) recently found that crimes against humanity are occurring, and it documented serious violations and abuses of human rights by all parties.  We applaud the UN for what it has done to shelter civilians on its compounds, and the Council must do more to support the African Union and IGAD in their response.

In Ukraine, we are deeply concerned by the human rights impact of destabilizing actions by external actors.  We support the continued work of the U.N. Human Rights Monitoring Mission.  Its report released just a few weeks ago documented an “alarming deterioration” in the human rights situation in Eastern Ukraine, as well as serious problems in Crimea.

The United States remains committed to positive engagement at the UN Human Rights Council and to working with all our partners to make this body more effective in responding to serious human rights abuses wherever they may occur around the globe.

I look forward to working with all of you throughout this Session and in the years ahead.