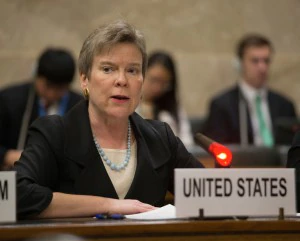 Acting Under Secretary of State for Arms Control and International Security

Mr. President, Acting Secretary-General Moeller, I am pleased to have this opportunity to address the Conference on Disarmament.  To start, I would like to congratulate Israel and Ambassador Manor and his team on assuming the first Presidency of the 2014 CD session, and to thank them for their very dedicated efforts in guiding our deliberations.  I would also like to extend our best wishes to the other CD Presidents for 2014 – Italy, Japan, Kazakhstan, Kenya, and Malaysia.  We look forward to working with all of you in the year ahead.

In his January 21 remarks to the Conference, UN Secretary General Ban Ki-moon spoke about the importance of substantive discussion in laying groundwork for future CD negotiations.  The United States believes it is crucial for the CD to adopt a program of work, but we also believe we must continue to engage substantively with one another – both about the disarmament steps we are taking and the steps we hope to take next – as we work to break this body’s impasse.

As colleagues here are well aware, we stand ready to begin negotiations on an FMCT, the next logical – and necessary – step in creating the conditions for a world without nuclear weapons.  It has been frustrating to watch the CD remain deadlocked over this issue, but negotiation of an FMCT is an essential prerequisite for global nuclear disarmament.  In recognition of this fact, Action 15 of the 2010 NPT Review Conference Action Plan included an agreement that the CD should begin immediate negotiation of an FMCT.  The United States will continue to urge negotiation of an FMCT in this body, convinced that FMCT negotiations at the CD will provide each member state the ability not only to protect, but also to enhance its national security.  With that as our guiding conviction, we look forward to engaging fully in the upcoming meetings of the Group of Governmental Experts (GGE), with a view to providing further impetus to long-sought FMCT negotiations in the CD.

As disappointed as we are that a Program of Work for the CD remains elusive, we are not standing still.  The United States has slashed its nuclear stockpile by 85% from Cold War levels.  Under the New START Treaty, US and Russian deployed strategic nuclear warheads will decline to their lowest levels in over half a century.  Recently, the US-Russia Highly Enriched Uranium (HEU) Purchase Agreement culminated with the final shipment of low enriched uranium converted from the equivalent of 20,000 dismantled Russian nuclear warheads to fuel US nuclear reactors.  Those former warheads have been providing ten percent of all US electricity.  One in ten light bulbs in the U.S. are lit by former Soviet weapon material.

Historic efforts like this one reflect the ongoing and significant progress we are making toward our Nuclear Non-Proliferation Treaty Article VI commitments. Here I would add that there are no shortcuts to reaching our shared goal of a world without nuclear weapons.  It is necessarily an incremental process that requires hard work by governments operating in the realm of supreme national and international security commitments impacting regional and global stability.  The United States is expending tremendous effort to meet its commitments, and we look forward to continuing to engage the Russian Federation regarding issues of strategic stability and with a view to achieving further bilateral reductions.

Like many of you, we are preparing for the upcoming meeting of the NPT Third Preparatory Committee, where we look forward to discussing the important roles both nuclear weapons states and non-nuclear weapons states play in implementing the 2010 Action Plan, in anticipation of the 2015 NPT Review Conference.  We are also preparing for the fifth P5 Conference, which we thank China for hosting this year.

The United States attaches great value to the P5 process.  I like to stress, the importance of the P5 process is not what it can produce in the immediate-term, but rather what it means for the prospects of multilateral nuclear disarmament efforts in years to come.  These conferences are an essential means for laying the foundation for future agreements that could involve parties beyond the United States and Russia.  Most people understand that we and Russia likely will need to take some additional bilateral steps before our arsenals are to a level where other nuclear weapon states would be prepared to join us at the negotiating table.  The work we are doing now in these conferences will help to ensure that when that day arrives, we will not be starting at square one.  Our partners will have the opportunity to benefit from the experience we have gained and shared regarding how monitoring activities like on-site inspections can be conducted to gain an understanding about the technology required to conduct arms control activities and methods of information sharing that build confidence that treaty partners are adhering to the agreement.

We also hope this process will lead to cooperative work in addressing the significant verification challenges we will face as we move to lower numbers and categories of nuclear weapons beyond strategic weapons.  The United States and the UK have begun some of this work on developing verification procedures and technologies, and we have briefed our P5 partners on the results.  The P5 are uniquely positioned to engage in such research and development given their experience as nuclear weapon states.  In the context of a P5 working group chaired by China, we continue to develop a common glossary of nuclear weapons-related terms.  A glossary may not sound important or interesting, until you consider that verifiable multilateral nuclear disarmament will require clear agreement on the definitions and concepts for the vital aspects that must be covered in future treaties.

We continue to work to build support for ratification of the CTBT, making the case to our citizens and legislators that the Treaty will serve to enhance our collective security.  We ask for the support of the international community in continuing to build and maintain the International Monitoring System and On-Site Inspection regime.  As we make the case for the Treaty’s verifiability, this support will be crucial.

These are just a few of the practical measures we are taking to advance toward our shared goal. We celebrate the progress these step-by-step efforts have achieved, but we know we still have much work to do.  We remain committed to fulfilling our obligations and working to take additional practical and meaningful steps.  Like UN Secretary General Ban Ki-moon, the United States agrees the CD continues to possess promise.  It must surmount its deadlock regarding a Program of Work, and in pursuit of that goal the United States is open to renewing the Informal Working Group.  At the same time, we believe that CD member states should foster substantive discussions aimed at future progress, with a view to promoting the prospects for work on issues ripe for negotiation, above all, an FMCT.  Like the Secretary General, we hope the CD helps to build “a safer world and a better future” because we also believe “that is its very mission.”  Thank you.