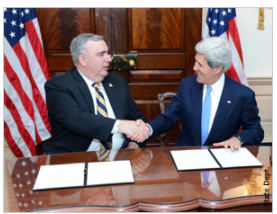 The Boston Police Department became the most recent of more than 60 U.S. law enforcement agencies to commit to capacity-building partnerships with foreign law enforcement entities when it signed a memorandum of understanding (MOU) with the U.S. Department of State May 13.

At a signing ceremony at the State Department with Boston Police Commissioner Edward Davis, Secretary of State John Kerry — who calls Boston home — said that by signing the MOU, the Boston Police Department will be helping itself as well as overseas law enforcement efforts.

“The countries we work with,” Kerry said, “gain in law enforcement ability, in rule of law, in their justice system, and that helps everybody with respect to everything that affects us — counterterrorism, democracy-building, all of the things that matter to us in the long run.” Among the benefits to the United States, Kerry said, is that “we build relationships, and out of those relationships can come mutual law enforcement assistance efforts. And we all benefit by that in this interconnected world we live in today.”

For the past three years, the U.S. Department of State’s Bureau of International Narcotics and Law Enforcement Affairs has been recruiting state and local law enforcement departments, corrections officials, prosecutors and judges to participate in its criminal justice assistance programs abroad. Participating U.S. police officers serve solely in an advisory capacity. Through training sessions and exchanges, U.S. partners help overseas law enforcement personnel develop the capacity to undermine criminal networks and reduce criminal threats both in the United States and in the partner nations. Funding for these programs is provided by the State Department.

Also on May 13, Assistant Secretary of State for International Narcotics and Law Enforcement Affairs William R. Brownfield conducted a special ceremony at the State Department to recognize the expertise provided by federal, state and local criminal justice partners to advance civilian security around the world. The ceremony also kicked off the first day of National Police Week in the United States, which brings thousands of law enforcement officers from around the world to Washington to honor law enforcement officers who have died in the line of duty.

“What happens overseas,” Brownfield said at the ceremony, “has an impact on us, our homes, our streets, our communities.”

In describing partnerships between U.S. and overseas law enforcement, Brownfield acknowledged that “this is not a one-size-fits-all world.”

“Our challenge,” Brownfield said, “is to put the right resources, the right talent set and skill set into the individual country to reflect its reality.” The one constant element, he said, is to train, equip, advise and assist. “And we will do one or more of those missions anywhere that we are deployed,” he said.

In some cases the United States might do all four, while in others it might do only one, he said.

To learn more, see the fact sheet “Partnering with State and Local Authorities to Support International Criminal Justice Sector Assistance” on the State Department’s website and the website for National Police Week 2013.