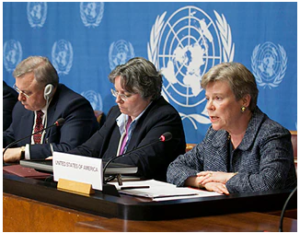 Following is the text of a joint statement issued by China, France, Great Britain, Russia, and the United States at the conclusion of the Fourth P5 Conference: On the Way to the 2015 NPT Review Conference, April 18-19, in Geneva, Switzerland.

FOURTH P5 CONFERENCE: ON THE WAY TO THE 2015 NPT REVIEW CONFERENCE

The five Nuclear Non-Proliferation Treaty (NPT) nuclear-weapon states, or “P5”, met in Geneva on April 18-19, 2013 under the chairmanship of the Russian Federation, to build on the 2009 London, 2011 Paris and 2012 Washington P5 conferences. The P5 reviewed progress towards fulfilling the commitments made at the 2010 NPT Review Conference, and continued discussions on issues related to all three pillars of the NPT – non-proliferation, the peaceful uses of nuclear energy and disarmament, including confidence-building, transparency, and verification experiences. The P5 also had a positive exchange with representatives of civil society during the Geneva P5 Conference.

The P5 reaffirmed their commitment to the shared goal of nuclear disarmament and general and complete disarmament as provided for in Article VI of the NPT and emphasized the importance of continuing to work together in implementing the 2010 NPT Review Conference Action Plan. The P5 reviewed the outcome of the 2012 Preparatory Committee for the 2015 NPT Review Conference, and significant developments in the context of the NPT since the 2012 Washington P5 Conference. They assessed issues relating to strategic stability and international security, and exchanged views concerning prospects for further steps to promote dialogue and mutual confidence in this area, including in a multilateral format.

The P5 advanced their previous discussions of an approach to reporting on their relevant activities across all three pillars of the NPT Action Plan at the 2014 NPT Preparatory Committee Meeting, consistent with the NPT Action Plan, and resolved to continue working on this issue under France’s leadership. They plan to continue their discussions in multiple ways within the P5, with a view to reporting to the 2014 PrepCom, consistent with their commitments under Actions 5, 20, and 21 of the 2010 RevCon Final Document. They welcomed the progress made on the development of the P5 glossary of key nuclear terms under China’s leadership and discussed next steps. They stressed the importance of this work, which will increase P5 mutual understanding and facilitate further P5 discussions on nuclear matters. The P5 reaffirmed their objective to submit a P5 glossary of key nuclear terms to the 2015 NPT Review Conference. The P5 are working toward the establishment of a firm foundation for mutual confidence and further disarmament efforts. They shared further information on their respective bilateral and multilateral experiences in verification and resolved to continue such exchanges.

The P5 recalled their Joint Statement of 3 May 2012 at the Preparatory Committee of the NPT Review Conference and pledged to continue their efforts in different formats and at various international fora to find peaceful diplomatic solutions to the outstanding problems faced by the non-proliferation regime. They reiterated their call on the states concerned to fulfill without delay their international obligations under the appropriate UN Security Council resolutions, undertakings with the IAEA and other appropriate international commitments. In the context of the nuclear test conducted by the DPRK on 12 February 2013 and the continued pursuit of certain nuclear activities by Iran, both contrary to the relevant UN Security Council resolutions and IAEA Board of Governors resolutions, the P5 reaffirmed their concerns about these serious challenges to the non-proliferation regime.

TheP5 underlined the fundamental importance of an effective International Atomic Energy Agency (IAEA) safeguards system in preventing nuclear proliferation and facilitating cooperation in the peaceful uses of nuclear energy. The P5 stressed the need for strengthening IAEA safeguards including through the promotion of the universal adoption of the Additional Protocol and the development of approaches to IAEA safeguards implementation based on objective state factors. They also discussed the role of the P5 in assisting the IAEA in cases involving possible detection of nuclear weapon programs in non-nuclear weapons states (NNWS) in conformity with the provisions of the NPT.

The P5 continued their previous discussions of efforts to achieve the entry into force of the Comprehensive Nuclear-Test-Ban Treaty (CTBT), and reviewed the recent UK-hosted P5 Experts Meeting on CTBT, at which the P5 identified a number of areas for future P5 collaboration and decided to pursue further intersessional work, in particular ahead of the Integrated Field Exercise in 2014.  The P5 called upon all States to uphold their national moratoria on nuclear weapons-test explosions or any other nuclear explosions, and to refrain from acts that would defeat the object and purpose of the Treaty pending its entry into force.

The P5 shared their views on how to prevent abuse of NPT withdrawal (Article X). The discussion included modalities under which NPT States Party could respond collectively and individually to a notification of withdrawal, including through arrangements regarding the disposition of equipment and materials acquired or derived under safeguards during NPT membership. They resolved to make efforts to broaden consensus among NPT States Party on the latter issue at the 2014 PrepCom, thus making a further contribution to the NPT Review Process.

The P5 reiterated the importance of the implementation of the 2010 NPT Review Conference decisions related to the 1995 Resolution on the Middle East, in particular those related to the convening of a conference, to be attended by all the States of the Middle East, on the establishment of the Middle East zone free of nuclear weapons and all other weapons of mass destruction, on the basis of arrangements freely arrived at by the states of the region.They underlined their support for all States concerned making all efforts necessary for the preparation and convening of the Conference in the nearest future. They also reiterated their full support to the ongoing efforts of the facilitator.

The P5 reviewed their efforts to bring about the entry into force of the relevant legally binding protocols of nuclear-weapon-free zone treaties. They reaffirmed their view that establishment of such zones helps to build confidence between nuclear and non-nuclear weapon states, enhance regional and international security, and reinforce the NPT and the international nuclear non-proliferation regime. They reaffirmed their readiness to sign the Protocol to the Treaty on the Southeast Asia Nuclear-Weapon-Free Zone as soon as possible. They underlined the importance of holding consultations, including on the margins of the Second PrepCom, with the States Party to the Treaty on a Nuclear Weapon-Free-Zone in Central Asia. They noted also the parallel declarations, adopted by the P5 and Mongolia, concerning Mongolia’s nuclear-weapon-free status, at the United Nations headquarters in New York on 17 September 2012.

The P5 pledged to continue to meet at all appropriate levels on nuclear issues to further promote dialogue and mutual confidence. The P5 plan to follow up their discussions and hold a fifth P5 conference in 2014.