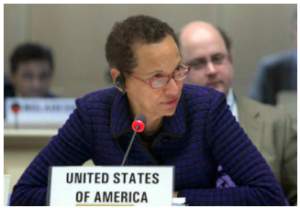 Statement on Road Safety for WHO report launch

The Government of the United States has been committed to the issue of road safety for a long time, both domestically and internationally.  At home we pursue a broad range of initiatives to improve road safety, including programs to improve driver behavior and create safer roads, and research and testing to ensure the safety of vehicles and support the development of enhanced automotive safety technologies.

Our international efforts include work on Global Technical Regulations for motor vehicles and technical assistance for behavioral programs and roadway improvement.

We were well represented at the First Global Ministerial Conference on Road Safety in Moscow in November 2009.   At that conference, US Department of Transportation Secretary Ray LaHood expressed our commitment and spoke about how our international community can apply evidence-based best practices as we work together to improve traffic safety globally.  Support from many directions – the United Nations, government organizations around the world as well as non-government organizations and foundations – has since raised public awareness of this issue to new levels.

The Government of the United States was actively involved in the launch of the Decade of Action in May 2011 with an event on Capitol Hill.   Having created the United States Congressional Caucus on Global Road Safety, and with support from a very active collection of non-government organizations, we have been able to maintain attention to the Decade and related activities and events.

We recognize that promoting road safety is an ever-evolving challenge and one that benefits greatly from international cooperation on research and sharing of best practices.  For example, everyone is all-too familiar with the terrible consequences of drunk driving and increasingly aware of the dangers of driving with distractions such as text messaging or talking on a cell phone. Working with the Department of Transportation and other Federal agencies, the Office of National Drug Control Policy is taking steps to highlight the growing problem of drugged driving at home through our national drug control strategy and abroad through highlighting this issue at the Commission on Narcotic Drugs.

We value the wealth of data and information provided by the new 2013 Global Status Report on Road Safety, as we understand the power of good data in guiding policy change.

We also recognize, as is reflected in the report, that the United States still has room for improvement when it comes to the safety of its roads.

We remain committed.  The United States National Highway Traffic Safety Administration has supported development of the soon to be released Pedestrian Manual on Road Safety.

The United States Centers for Disease Control and Prevention supported development of a series of related manuals including for drinking and driving and helmet use.

We are very pleased to see this ongoing follow-up to the 2009 Ministerial Conference and the Decade of Action at the global and national levels and wish you the best of luck with your mission.