Ambassador Kennedy Welcomes Twitter as a Tool to Enhance the Practice of Diplomacy
By U.S. Mission Geneva
9 MINUTE READ 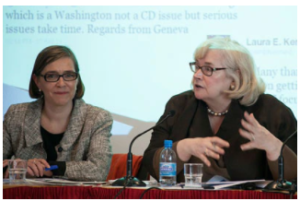 Opening Comments at the Panel Discussion

Thanks GCSP for including me in this panel and to Dr. Kaski for chairing. It’s a pleasure to be speaking with my friends Amb. Kairamo and Dr. Kurbalija. Within the broad topic of social media, I am going to focus on twitter.

Amb. Kairamo’s comments on the role of Non-governmental organizations provided me with an excellent lead in to my presentation in which I will touch on the role of twitter in connecting diplomats with civil society.

There is so much fascinating material out there on twitter that I could discuss this topic all day – blessedly free from the 140 character twitter limitation! In the interests of time, I will simply offer a personal perspective on my own journey from twitterphobe to skeptic to enthusiastic practitioner.

Before we get started, could I ask for a show of hands of those in the audience who are now on twitter? (Note: about one third of audience.)

As you may know, twitter was born in 2006 and has rapidly surged to around a half billion users worldwide. The US has the largest number of twitter users and other top users are Brazil, the UK, Indonesia, Malaysia and Mexico.  There are different metrics on how to measure twitter use – I think, for example, that the Netherlands ranks as the most “intensive” twitter user. The role of social media in the Arab Spring has been extensively studied.  As many commentators have noted however, twitter is not inherently “good” – it is a tool which can have both positive and negative impacts.  The challenge is therefore, how do we “amplify the positive” and “mitigate the negative” in what we have dubbed “21rst Century Statecraft.”

Secretary of State Hillary Clinton embraced social media and encouraged its use, very much including twitter.  She was assisted by such figures as @ediplomacy’s Richard Boly, who spoke here at GCSP recently, and her senior advisor on innovation, Alec Ross.  I am delighted to note that the visionary Mr. Ross will be here to take part in a program we are sponsoring here in Geneva on March 7. (Register for “Securing Human Rights Online” at http://iff-panel.eventbrite.com  – Webcast:  http://www.internetfreedomfellows.com/webcasts/

The State Department has worked hard at building in social media in every facet of its work – trade, development, communications, education etc.  There is a huge list of Embassies that tweet and that list is still growing.  There is a  more limited list of Ambassadors who tweet but that number is growing as well.  And it starts at the top – President Obama, with almost 20 million followers, is the most widely followed world leader.

I am happy to say this will continue under our new Secretary as well.  The State Department (@StateDept) is an active tweeter and Secretary Kerry has announced that his personal tweets will carry the additional identifier of “JK” Now, after I tweeted this good news, one of my kids informed me that “JK” is internet shorthand for “just kidding”! I can assure you, however, that the State Department is not kidding about the value it places on social media tools.

Despite this positive environment, I must say that I was at first completely dismissive of twitter. Basically, my concern centered around  how can one reduce complex topics down to 140 characters?  But I decided I should at least tackle this new media and see what I could make of it.  I had an example close at hand.  The  Secretary General for the Conference on Disarmament and Director General of the United Nations Kassym-Jomart Tokayev is an active tweeter.  In fact, the UN as a whole is an enthusiastic tweeter with a multitude of different platforms.  My boss, Acting Undersecretary Rose @Gottemoeller is a twitter pro.

I quickly grew to prize the utility of using a tweet to draw attention to important speeches or documents by including the link to that text (or video).  Nothing beats twitter in terms of the rapidity and breadth of its reach.  It is of course an art to pick out key elements of a speech and relay via twitter – this is akin to the soundbites that communicators usually seek to convey.  It is also a great research tool. Journalists around the world are using tweets to preview or amplify their own stories or broadcasts.  I have found that many foreign ministries are tweeting developments and speeches before they are actually posted to their websites. Can I ask for a show of hands of those here who are aware of whether your respective ministries tweet? (Note: only a very small number in the audience.)

One personal example of the increasing reach of twitter is a series of recent exchanges in the Conference on Disarmament re the North Korean nuclear test. I made two statements at two different plenaries, including the White House statement , and did a few tweets.   In one news story, the journalist quoted my tweet, not my official statements, although the latter were both made on the record.

Twitter is perhaps even more valuable to receive information as it is to  send it – particularly with civil society.  I know that I “follow” far more civil society tweeters than I do other official governmental sources.  This is a unique way to LISTEN, to gather information and gauge attitudes.  It also offers an immediate and direct ability to have a dialogue, particularly with audiences outside your own geographical setting.

The downside to twitter? It takes time.  Although I welcome suggestions from my colleagues, I read the twittersphere myself and compose all my own tweets.  This means I usually do all reading and sending twitter late in the evening on my Ipad since during the day I am focused on a range of traditional diplomatic activities.  Late in the day after a busy and sometimes tiring day is NOT necessarily the best time to make judgments. So, I try to remind myself to take the time to THINK  before I hit that send button.

However, I have tried to build in real-time tweeting into my diplomatic round such as tweets I have sent during the meetings here in Geneva of the Conference on Disarmament and  the Biological Weapons Convention as well as when I am in New York at disarmament sessions of the UN General Assembly.  I particularly like to tweet about the Biological and Toxin Weapons Convention because I believe that this important pillar of the global WMD nonproliferation regime does not get as much attention as it deserves compared to the NPT and CWC.  My sense is that these real-time tweets are particularlv appreciated because it gives a sense of immediacy to readers around the world who may be very interested to know what their taxes are paying for in various diplomatic fora around the world!   Of course, I am tweeting about formal sessions on the record, NOT confidential negotiations or conversations which would not be appropriate for twitter.

In one recent example, I was tweeting during an extended session of the Conference on Disarmament but said I would have to sign off because my Ipad was out of power. The nicest tribute I ever had was one tweeter who appealed to others to please get the lady a battery!

As I noted earlier, I am still learning and still very much a novice. I just had my one year birthday on twitter. In fact, twitter provided me with a birthday card to mark the occasion.

Twitter may not be suited to everyone’s interests and needs.  But I do urge diplomats to at least explore this new medium.  You just may find that you agree with me that this is a great new tool to enhance our practice of diplomacy beyond the traditional sphere of state-to- state to include state-to-people, people-to-state and, of course, people-to-people.

Thank you all very much for listening today and, of course, I would be delighted if you wish to follow me @AmbKennedy !