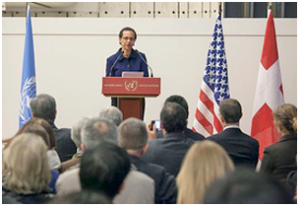 Remarks  delivered by Ambassador Betty E. King at an event to celebrate the 40th anniversary of the Convention for International Trade in Endangered Species of Wild Fauna and Flora (CITES)

Good evening.  I join Director-General Tokayev, my fellow ambassadors,
and CITES Secretary-General Scanlon in welcoming you.  It is a pleasure to be celebrating CITES’ 40th anniversary with this exhibition and short film program.

In 1973, representatives of 88 nations met in Washington and agreed on a groundbreaking effort to manage the global trade in species of plants and animals in ways that do not threaten their existence.  Today, CITES boasts 177 Parties committed to responsible plant and animal trade.  I am proud that the United States was one of the Convention’s first signatories.

We all share the responsibility to protect our planet’s natural beauty and biodiversity.  Despite the enormous progress made because of CITES’ controls, biodiversity is under pressure.  For example, the growth of the global middle class, which has lengthened and enriched so many lives, has also brought increased demand for such symbols of wealth and status as elephant ivory and rhino horn.  Some estimates suggest the value of the global illegal trade in wildlife is among the top five most lucrative forms of illicit trade, along with the drug trade, illegal arms sales, and human trafficking. This black market for wildlife products threatens security and the rule of law, undermines conservation efforts, robs local communities of their economic base, and contributes to the emergence and spread of disease.

That’s why the United States is committed to tackling the problem of wildlife trafficking both at home and abroad.  Former Secretary Clinton focused on this issue, and Secretary Kerry highlighted wildlife conservation and poaching issues while in the Senate.  The United States combats the illegal trade in wildlife and promotes conservation through domestic action and international partnership.

Since we are gathered in this Palais des Nations, let me say a few words about the importance of international partnership in this effort. The United States strongly supports CITES, the International Union for the Conservation of Nature, and other organizations that work on plant and animal trade and the interconnected issues of crime, health, conservation, development, and security.  We are cooperating on creating a global system of regional Wildlife Enforcement Networks to improve communications and strengthen response actions.  We work bilaterally and through regional organizations to enhance developing coastal States’ abilities to prevent the illegal fishing that undermines sustainable development and food security.  We support the Coalition Against Wildlife Trafficking to engage governments, civil society, and the private sector in combating wildlife crime.  Our Smithsonian Institution collaborates around the world on biological research, community engagement issues, and wildlife translocation.

Despite our efforts, the United States remains one of the world’s largest markets for trafficked wildlife and wildlife products.  We are not proud of this.  At home we are spreading the word that buying trafficked items is illegal, threatens wildlife species and their habitat, and inflicts human suffering.  An informed consumer is a powerful weapon in this fight.

In closing, continued cooperation through CITES and other committed, far-reaching partnerships is crucial for managing the trade of plants and animals and combating poaching. We look forward to working with you at next month’s Conference of the Parties in Bangkok. Congratulations to CITES on this milestone.

I’d now like to present a short public service announcement featuring Harrison Ford sponsored by the U.S. Department of State in cooperation with the Coalition against Wildlife Trafficking. It’s a direct tool to highlight the U.S. commitment to combating trade in endangered species and the impact that it has around the world.