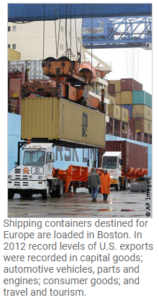 The Department of Commerce has announced that the export of U.S. goods and services reached an all-time record during 2012, growing $92.6 billion for a total of $2.2 trillion as the U.S. economy continues to make progress toward President Obama’s goal of doubling exports from their 2009 levels.

In a February 8 statement, Acting Secretary of Commerce Rebecca Blank said record levels of exports were recorded in a variety of areas, including capital goods; automotive vehicles, parts and engines; consumer goods; and travel and tourism.

The U.S. economy is a crucial engine for growth in the global economy, and movements in its gross domestic product, international trade levels, employment and monetary policy are closely monitored by world governments and international financial markets. World currency markets also monitor U.S. economic activity because the U.S. dollar acts as the reserve global currency that underpins the 24-hour-a-day foreign exchange market that links to the flow of global investments.

“Not only did exports outpace the growth in imports for the first time since 2007, but exports have helped support the creation of over 6 million private-sector jobs over the past 35 months,” Blank said.

Approximately 95 percent of global consumers are outside the United States. In his 2010 State of the Union address, President Obama called for a doubling of U.S. exports from their 2009 level of $1.57 trillion by the year 2015. Under the National Export Initiative, the Obama administration is working to remove trade barriers and encourage American businesses to find new markets to promote economic recovery.

In her statement, Blank said the National Export Initiative “has helped U.S. companies by leveling the playing field and providing access to new markets,” and that the work to increase exports “is more important than ever — particularly with global economic head winds affecting the rate of export growth across the board.”