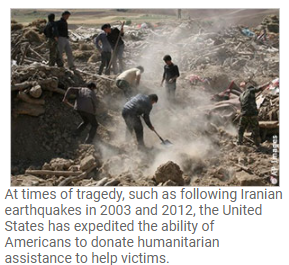 U.S. sanctions have been steadily tightening on Iran as a result of the Iranian government’s continued failure to live up to its international obligations regarding its nuclear and ballistic missile activities. However, Americans have remained free to send humanitarian assistance to help the Iranian people, including food, medicine and money, according to the U.S. Treasury Department.

According to a February 6 press release from the Treasury Department’s Office of Foreign Assets Control (OFAC), under U.S. law the sale and export of nearly all types of food and medicine, as well as basic medical supplies, are “broadly authorized,” and other types of U.S. humanitarian exports can gain authorization through a license from OFAC.

“OFAC administers U.S. laws and regulations in a way that allows Americans to continue their humanitarian support of the Iranian people without providing support to the Government of Iran. The U.S. Government’s commitment to facilitating humanitarian engagement with the Iranian people is manifest in its longstanding policy to authorize exports or re-exports of humanitarian goods, such as agricultural commodities, medicine, and medical devices, to Iran,” OFAC said.

Under U.S. law, there is a general authorization for Americans to freely send certain humanitarian items, with specific OFAC authorization available for other items.

“Donations of food and medicine by U.S. persons intended to relieve human suffering are exempt from the sanctions on trade between the United States and Iran, provided such donations are not to the Government of Iran, Iranian financial institutions, or any other person whose property and interests in property are blocked,” OFAC said. The organizations, institutions and individuals who have been designated for U.S. sanctions have mostly been linked to the Iranian government and its illicit activities, as well as its curtailment of Iranian human rights.

In addition, U.S. financial institutions are allowed to process “noncommercial, personal remittances to Iran,” allowing individuals inside the United States to “assist a family member or friend” so long as the payment is processed through a third-country financial institution and not directly transferred from an American bank to an Iranian bank, which is currently prohibited under U.S. law.

OFAC also says it administers a “favorable licensing policy” for projects and activities that are designed to benefit democracy and human rights in Iran, as well as for academic and cultural exchange programs. It has also adopted an expedited application process for those “seeking to engage in certain human rights-, humanitarian- and democracy-related activities with respect to Iran.”

Over the past decade Iran has suffered two devastating earthquakes; OFAC said that at times of crisis and tragedy the U.S. government has facilitated expedited humanitarian assistance to Iran. Following the devastating Bam earthquake in December 2003, the United States airlifted pre-positioned emergency supplies to help the thousands of victims, and the U.S. Agency for International Development (USAID) sent a Disaster Assistance Relief Team that assisted with rescue efforts and deployed a mobile hospital unit with medical supplies.

In the aftermath of the Bam earthquake, OFAC also issued a temporary authorization to allow people living in the United States to make donations to nongovernmental organizations working to aid the victims. The office followed up with a similar authorization allowing U.S.-based nongovernmental organizations to “transfer funds related to earthquake relief efforts to or for the benefit of persons in Iran” following an earthquake in August 2012.

U.S. sanctions are “intended to impose consequences on Iran’s leadership for their failure to adhere to their obligations and alter their dangerous course,” and they have had “a tangible impact on the Government of Iran’s ability to engage in illicit activities, making concrete the costs and isolation that the Government of Iran will continue to face so long as its leadership chooses to ignore their international obligations,” OFAC said.

At the same time, food and medicine intended to relieve the suffering of the Iranian people are exempt from U.S. sanctions, OFAC said.