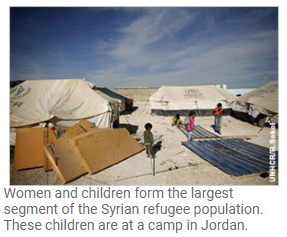 The international humanitarian community is using every available channel to assist more than 760,000 refugees who have fled violence in their country and some 2.5 million others who remain in Syria, displaced from their homes, facing shortages and hardship wrought by the almost 2-year-old uprising.

U.S. officials involved in the effort briefed reporters February 6 on the U.S. contribution of $365 million to the relief effort.

“What will be important going forward is that we ensure we have the access that we need to reach people throughout Syria, especially in those hard-to-reach conflict-affected areas,” said Nancy Lindborg, assistant administrator for humanitarian assistance at the U.S. Agency for International Development (USAID). “And that’s why we’re using all the channels we can to get there.”

Humanitarian assistance is reaching all 14 governorates in Syria, but it is not reaching all the people who really need it, said Lindborg’s colleague, Anne Richard, assistant secretary of state for population, refugees and migration. In late January the two were in the region visiting refugee camps and assessing the state of the relief effort.

While there, Richard said, they were in touch with a convoy on a “risky venture” arranged by the U.N. refugee agency. Trucks full of aid supplies were on a mission to reach a corner of northern Syria in need of winter supplies. The trucks went through territory held by the opposition movement and by the Syrian government, Richard said.

“It took a lot of coordination for their route to actually open up and be able to get this very large convoy on its way,” said Richard.

The U.N. Refugee Agency reported that 200 metric tons of tents and blankets were airlifted from a warehouse in Copenhagen to a civilian airport on the Syrian coast. From there, an eight-truck convoy carried the aid shipment to an area between Aleppo and the Syrian-Turkish border.

Richard expressed hope that such an effort can be repeated and scaled up to deliver more aid in the future.

Allegations and rumors are circulating in the region that humanitarian aid has been given to, or seized by, the Syrian government. Richard heard such assertions while visiting the camps, and she described it as “misinformation” that the U.S. delegation refuted. Aid going into Syria is benefiting those for whom it is intended.

The Department of State official said the U.S. humanitarian team remains watchful for signs that aid is being diverted to the government or the black market. But as of now, “it is not happening,” Richard said.

The aid effort has been further criticized because assistance is not being extended directly to humanitarian groups backed by the Syrian Opposition Council (SOC). Lindborg said the relief effort is best managed by the established U.N. agencies and associated organizations that have long-term experience in the delivery of humanitarian aid on the basis of need rather than politics.

Lindborg said the information these groups can provide about areas of need is very helpful to the humanitarian effort, and SOC-related groups will continue to play a role in the campaign.

In related developments, the World Food Programme (WFP) announced February 5 a scale-up of feeding programs targeting Syria. WFP is providing food to 1.5 million people now, and plans to escalate its efforts in order to reach 2.5 million people in the next three months.

UNICEF announced February 4 that it is beginning to ship water chlorination supplies into Syria, addressing the concern that water purification facilities have been greatly damaged in the conflict.

At an international conference in Kuwait January 30, attending countries pledged more than $1.5 billion to help Syrian refugees in neighboring countries and those displaced within the embattled country.

Jordan, Turkey, Egypt, Iraq and Lebanon are host to the 760,000 Syrians who have fled the fighting. The U.S. officials say two-thirds of that number are not in refugee camps, as organized by the U.N. and regional governments. They are staying in villages and schools, and in the homes of relatives and friends, in widely varying circumstances.