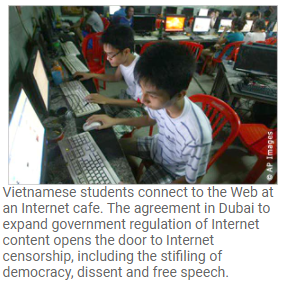 By Stephen Kaufman
IIP Staff Writer
Washington,
February 5, 2013
The head of the U.S. Federal Communications Commission (FCC) warned U.S. lawmakers that the Internet “is under assault” following a United Nations telecommunications treaty that was adopted in December 2012 by the U.N.’s International Telecommunications Union (ITU) at an international conference in Dubai.

In his prepared remarks to a February 5 joint hearing of the House of Representatives Energy and Commerce subpanel on communications and technology and the House Foreign Affairs subcommittees on terrorism and human rights, FCC Commissioner Robert McDowell said measures such as the ability of governments to decide what constitutes unsolicited Internet content, known as spam, have effectively “ended the era of an international consensus to keep intergovernmental hands off of the Internet in dramatic fashion.”

With the new regulation, under “flimsy pretexts” such as a stated desire to deal with network congestion, governments can inspect the content of Internet communications to determine if they can be blocked as spam, he said. That could be used to censor dissent, democracy and free speech.

Since the Internet became available for public use, it has relied upon “multi-stakeholder organizations,” including governments, the private sector and civil society groups, to make consensus decisions, rather than regulations, over its use and the promotion of best practices.

However, the 89–55 vote to approve a new telecommunications treaty that would go into effect in 2015 changed critical definitions that have helped to insulate Internet service providers, Internet content and application providers from intergovernmental control. The vote has in effect given the ITU “unprecedented authority over the economics and content of key aspects of the Internet,” McDowell said.

“Freedom, prosperity and the potential to improve the human condition across the globe are at risk. Any questions regarding these assertions are now settled,” he said.

McDonnell urged dialogue among governments, civil society, the private sector, nonprofit organizations and the ITU designed at broadening the multi-stakeholder structure to allow those who feel disenfranchised, including many developing countries, to play a meaningful role in shaping the Internet’s evolution.

“Primarily due to economic and logistical reasons, many developing world countries are not able to play a role in the multi-stakeholder process. This is unacceptable and should change immediately,” he said.

“Developing nations stand to gain the most from unfettered Internet connectivity, and they will be injured the most by centralized multilateral control of its operations and content,” McDonnell said.

The new treaty came despite assurances ahead of the Dubai conference that no votes would be taken there, a new treaty would be adopted only by the unanimous consent of participants, and any new treaty “would not touch the Internet,” but “all three promises were resoundingly broken,” McDonnell said.

The December conference was meant to renegotiate a 1988 treaty that governs international phone calls. However, the FCC commissioner said, the conference instead “became the perfect opportunity for proponents of expanded regulation to extend the ITU’s reach into the Internet’s affairs.”

McDonnell said the experience in Dubai offers “a chilling foreshadow of how international Internet regulatory policy could expand at an accelerating pace.”

He warned that time “is of the essence” and that those who cherish the current freedom of the Internet “must immediately redouble their efforts to prevent further expansions of government control of the Internet” ahead of an important ITU meeting that will be held in Korea in 2014.

That meeting is expected to result in a new constitution that “will define the ITU’s mission for years to come,” he said. McDonnell warned that in the current climate, “the momentum favors those pushing for more Internet regulation.”

“While we debate what to do next, Internet freedom’s foes around the globe are working hard to exploit a treaty negotiation that dwarfs the importance of the [Dubai conference] by orders of magnitude,” the FCC commissioner said.

“Two years hence, let us not look back at this moment and lament how we did not do enough. We have but one chance. Let us tell the world that we will be resolute and stand strong for Internet freedom. All nations should join us,” McDonnell said.