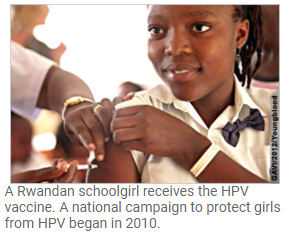 An international alliance to broaden the availability of immunizations announced a plan February 4 to distribute vaccine to protect girls from human papillomavirus (HPV) in eight developing world nations.

The GAVI Alliance announced the campaign to offer disease protection to more than 180,000 girls on World Cancer Day. HPV is a primary cause of cervical cancer, which kills 275,000 women each year, 85 percent of them in the world’s poorest nations.

But the campaign aims to do more than prevent cancer, according to a press release from the Geneva-based GAVI Alliance, which is backed with U.S. and international funding. The campaign will also give the countries involved the opportunity to scale up health care capabilities they’ll need to roll out the HPV vaccine on a national basis in the future.

“Introducing the HPV vaccine in developing countries is the start of a global effort to protect all girls against cervical cancer,” said Dr. Seth Berkley, the chief executive officer at GAVI. “Cervical cancer is one of the leading cancer killers of women in the developing world.”

The HPV vaccine campaign targets Ghana, Kenya, Laos, Madagascar, Malawi, Niger, Sierra Leone and Tanzania. But GAVI proposes a rapid scale-up, intending by 2015 to support 20 countries in the distribution of vaccine to 1 million girls. By 2020, the alliance plans to support efforts to vaccinate 30 million girls in 40 countries.

“It is imperative that young women and girls be protected against cervical cancer, the leading cause of cancer deaths in women in our region,” said Minister of Health Catherine Gotani Hara of Malawi. “The HPV vaccine is our best hope at protecting girls against this deadly disease.”

GAVI reports in a press release that cervical cancer kills more women worldwide each year than childbirth. Without the introduction of greater control measures, the disease is on a track to become more deadly, with deaths expected to reach 430,000 by 2020.

Vaccination programs are targeted to girls between the ages of 9 and 13 to give them protection before they become sexually active and risk exposure to HPV.

Most of the eight countries involved in the GAVI program will begin vaccinations in 2013, mainly through schools and community health programs.

The program targets girls because the consequences of HPV infection for them are far greater than in boys. Most men never develop any symptoms or health problems if exposed to HPV. Some forms of genital cancer will develop from HPV in men, but they are extremely rare.

Now supported by governments, corporations, foundations and private individuals, the GAVI Alliance formed in 2000 in response to declining rates of child immunization in the developing world. The United States is a major donor, along with the Bill & Melinda Gates Foundation.

U.S. Agency for International Development Administrator Rajiv Shah has said that GAVI “is just an absolutely outstanding example of the future of development policy and implementation.”

UNICEF, the European Commission, other Western European governments, Japan, the Republic of Korea and Russia are also GAVI donors.