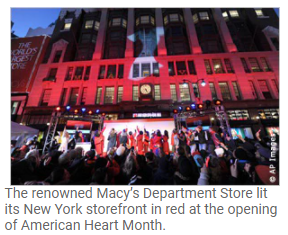 Both U.S. and international health institutions use the month of February as an opportunity to raise awareness about diseases that are among the greatest causes of premature death.

In the United States, the National Heart, Lung, and Blood Institute (NHLBI) promotes February as American Heart Month with the support of other nongovernmental organizations. One main theme of the event is to drive home the message to women that they face a serious risk of heart disease despite a widely held but erroneous impression in the lay public that men are much more vulnerable to the condition.

NHLBI, one of the National Institutes of Health, is promoting The Heart Truth, a campaign based on real-life stories of women who have become proactive in protecting their heart health at the same time they inspire and motivate others to make heart-healthy lifestyle changes.

“Over the past 11 years, The Heart Truth campaign has raised awareness that heart disease is the leading killer of women in the United States,” said Dr. Gary H. Gibbons, director of the NHLBI. “Closing the gap between awareness and prevention of heart disease remains a critical public health imperative, and with the information, tools and support offered by The Heart Truth, women have tremendous power to create change.”

Managing cholesterol levels, controlling blood pressure and not smoking are among the key strategies for reducing the risk of heart disease for both women and men. Lifestyle habits such as a balanced diet, physical activity and maintaining a healthy weight also minimize the prospect of heart disease and other cardiovascular diseases (CVDs).

While the NHLBI’s campaign is directed toward U.S. women, the message is an important one for people everywhere. The World Health Organization (WHO), cites CVDs — to include heart attacks, stroke, high blood pressure, peripheral artery disease and heart failure — as the Number 1 cause of death for people worldwide.

WHO estimates that CVDs were the cause of death for 17.3 million people in 2008, the most recent year for which the data has been analyzed. The greatest burden of CVDs is carried by low- and middle-income countries, where 80 percent of all deaths occur.

The healthy habits promoted by the U.S. Heart Truth campaign are the same ones that WHO advises to reduce CVDs worldwide. The Geneva-based organization reports that 80 percent of heart disease and stroke stems from high-risk lifestyles.

WHO joins the Union for International Cancer Control February 4 in recognizing World Cancer Day. As with American Heart Month, the purpose of marking this disease on the calendar is to raise awareness about the dangers and to promote the message that proper lifestyle choices are a strong defense against cancer.

Cancer is a broad term that describes a large group of diseases that can affect any part of the body. The common characteristic is the rapid creation of abnormal cells that begins in one area of the body but then invades adjoining tissues and spreads to other organs.

Cancer took about 7.6 million lives in 2008, accounting for 13 percent of all deaths. Lung, stomach and liver cancers are the most frequently occurring. WHO cites tobacco as the single most important risk factor, causing 22 percent of global cancer deaths and 71 percent of lung cancer deaths.

WHO reports that more than 30 percent of cancer deaths could be avoided by reducing the lifestyle risk factors of tobacco use, alcohol use, unhealthy diet and physical inactivity.