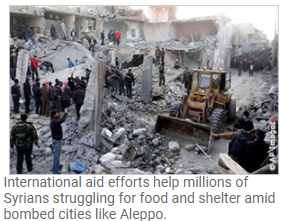 President Obama announced an additional $155 million in aid for the Syrian people a day before the conference, bringing total U.S. support during the almost two-year-old crisis to $365 million.

U.S. Assistant Secretary of State for Population, Refugees, and Migration Anne Richard spoke for the U.S. delegation at the meeting convened by Sheikh Sabah Al Ahmad Al Jaber Al Sabah, the emir of Kuwait. Meeting the needs and relieving the suffering of 4 million people inside Syria and the 700,000 who have sought safety in bordering nations is critical, Richard said. But ensuring consistent delivery of adequate amounts of aid is also imperative.

“The Syrian government must stop obstructing the delivery of humanitarian assistance, and likewise no armed opposition group should hinder aid delivery,” Richard said.

At the same time, she praised the efforts of 11 U.N. agencies and more than 4,000 staff who form the front line of aid delivery, “most of whom are brave Syrians doing their utmost to protect and aid their fellow citizens.”

Richard urged all donor governments and relief workers “to prevent the misuse of humanitarian assistance for political purposes.”

Living conditions of people in the two-year old conflict are “deteriorating rapidly,” Richard said, after her visit to a refugee camp in Turkey on the Syrian border last week. The United States earmarked $10 million last week alone just to deliver flour to bakeries providing essential daily sustenance to Syrians.

“We are funding emergency health care and supplies, which enable surgeons in field hospitals to save more lives,” Richard said. She also described U.S. efforts to meet the needs of people living in the ruins of bombed buildings, providing plastic sheeting, heaters, blankets and other winter supplies.

Lebanon, Jordan, Turkey, Iraq, Egypt and other nations are all hosting some of the hundreds of thousands of Syrian refugees. Richard said the United States salutes their efforts, and pledges continued support.

In his announcement of the aid increase January 29, President Obama said the United States will continue to work to stop the violence in Syria and predicted the forthcoming fall of President Bashar al-Assad.

“The Syrian people will have their chance to forge their own future,” Obama said. “And they will continue to find a partner in the United States of America.”

U.N. humanitarian agencies are trying to raise $1.5 billion to help Syrians inside the country and out. The U.N. News Service reported that the amount pledged in Kuwait exceeded that goal, but tallies are still being calculated.