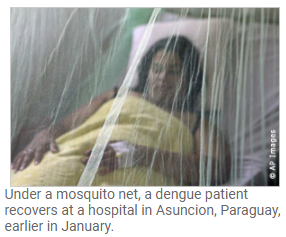 U.S. medical researchers have developed a trial vaccine that holds promise for preventing dengue — a disease that sickens an estimated 50 million people or more each year. Occurring in cities and suburbs in tropical and subtropical climates, dengue threatens potentially 2.5 billion people, according to the World Health Organization (WHO).

The National Institute of Allergy and Infectious Diseases (NIAID) has conducted one clinical trial involving just over 100 subjects, finding that the “candidate” vaccine is safe and stimulates a strong immune response in most patients. NIAID published the results in the January 17 issue of the Journal of Infectious Diseases.

“The global burden of dengue is enormous — and it is growing,” said NIAID’s director, Dr. Anthony S. Fauci. “We are cautiously optimistic about these recent clinical trial results.”

The disease is caused by four related mosquito-borne viruses and leads to flu-like symptoms, though escalation to severe dengue can result in death. DENV-1, DENV-2, DENV-3 and DENV-4 are all transmitted to humans by Aedes mosquitoes.

The fact that the virus takes four different forms makes vaccine development challenging. Infection with one strain will give an individual immunity in the future for that same strain, but not the other three. Research has shown, in fact, that if a person later becomes infected with one of the other three strains, the disease can be even more severe, escalating to internal bleeding, organ dysfunction or shock.

This means that having one vaccine with the capability to thwart all four strains — a tetravalent vaccine — would be the most advantageous. Scientists at NIAID’s Laboratory of Infectious Diseases have developed a candidate they’re calling TetraVax-DV. They’ve developed four versions at this stage, each containing different components to protect against all four viruses.

Tested in three different U.S. cities with a group of 112 subjects, each of the trial vaccines prompted antibody responses against each of the viruses. One candidate did stand out from the rest however, producing an immune response in 90 percent of the subjects who received it. The research team calls that vaccine candidate TV003.

“What is promising about TV003 is that it elicited solid antibody responses after just one dose,” explained Stephen Whitehead, Ph.D., of NIAID’s Laboratory of Infectious Diseases, who led the development of the vaccine candidates. “Other vaccines in development require two or three injections at higher doses to achieve similar results.”

None of the subjects experienced fever or other dengue symptoms after vaccination. A faint rash appeared in some subjects as a side effect, the researchers reported, but it did not become painful and faded away in less than a week.

The researchers also noted different responses among white and African-American subjects. Antibodies to at least three of the viruses developed in 97 percent of the white vaccine recipients, but just 60 percent of the African-American subjects developed antibodies. A greater percentage of the white subjects broke out with the rash, compared to the African Americans. Researchers don’t have an explanation for that now.

Different outcomes in different racial groups also appeared in earlier research of dengue outbreaks in Brazil, Cuba and Haiti, an NIAID press release explains. One possible explanation is that people of African lineage may have a genetic inheritance that better protects them from dengue, or the weaker antibody response may be attributable to still-unknown factors.

The NIAID team writes in the Journal of Infectious Diseases that further research must examine racial differences in dengue infection, and those studies have begun. Future studies will also look at the safety of the vaccine candidate and its ability to stimulate an immune response in people who have been infected previously.

Phase II trials will begin soon in Brazil and Thailand, according to NIAID. NIAID is one of 27 institutes and centers that make up the National Institutes of Health, a federal agency engaged in a wide range of medical research.

“The global incidence of dengue has grown dramatically in recent decades,” according to WHO documents. Before 1970, serious dengue epidemics had occurred in only nine countries, and today the disease is appearing regularly in more than 100 nations. Sometimes called breakbone fever, severe dengue has become a leading cause of serious illness and death for children in some Asian and Latin American countries.

No specific treatment or medicine cures dengue, but early detection and access to proper care can keep the fatality rate below 1 percent, WHO said. Controlling the mosquito population that carries the virus is one of the best strategies for preventing the disease.