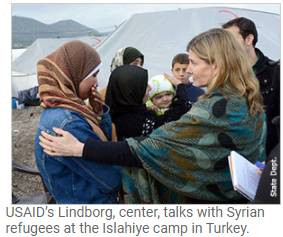 More than 650,000 Syrian refugees have fled the 2-year-old uprising in their country, traveling to neighboring Jordan, Iraq, Lebanon, Turkey and Egypt, according to U.N. officials.

Top U.S. aid officials were in the Islahiye Camp in Turkey January 24, spending hours with camp staff and refugees. The United States is a major donor to the humanitarian aid effort to support these refugees and Syrians still in their country needing assistance. In Ankara January 25, the United States announced a further $10 million increase in aid. Assistant Administrator Nancy Lindborg of the U.S. Agency for International Development (USAID) said that amount boosts U.S. relief in this crisis to $220 million.

“It’s heartbreaking,” said Lindborg after she met with refugees. “You hear stories of families who were in their house when it was shelled,” she said. “You see the shrapnel scars on kids that are 10 and 12 years old.”

U.S. Ambassador to Syria Robert Ford, also on the Islahiye visit, said people in the camps have found safety from the violence that has racked their homeland for two years. The needs of this exiled population still grow, however, and Ford said the United States will be participating in a January 30 conference in Kuwait City that is billed as an international humanitarian pledging conference for Syria.

Lindborg said the United States will be “pledging an additional substantial package of assistance” at the Kuwait meeting.

As overnight temperatures approach the freezing mark in the region, Lindborg said, meeting the needs of camp residents and other displaced people has become a priority. Shipments of blankets, warm clothing and other cold weather supplies are coming into the region.

“We will have reached 460,000 people, particularly in the northern parts of Syria, with that kind of help by the end of this month,” Lindborg said.

Ford described a conversation with one woman who had already lost two sons fighting the Assad regime, and yet held on to hopes that she would return to Syria one day.

“She said to me, ‘Mr. Ambassador, I hope to see you back in Damascus in a free Syria,’” Ford recounted. “She’s suffered so much, and now she’s in a refugee camp, and yet she hasn’t lost hope. People like that — their bravery and strength is quite remarkable.”

The U.S. humanitarian delegation thanked the Turkish government for the effort it has extended to provide safety for Syrian refugees.

The U.N. Refugee Agency has warned that the number of Syrian refugees could double to 1.1 million by June 2013, with more than half that number being children. U.N. estimates calculate that $1.5 billion will be needed just in the first half of 2013 to meet the growing needs.

U.N. officials also estimated the week of January 21 that 2 million people still inside Syria have been displaced from their homes. As many as 4 million need humanitarian assistance of some kind, the U.N. reported, because of the lack of food, shelter and medical help.