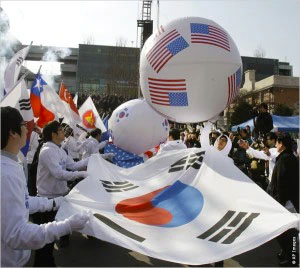 At the time the agreement went into effect, South Koreans, holding large balloons and giant U.S. and South Korean flags, celebrated at a rally in Seoul, shown above.

The Joint Committee is the premier committee under the agreement, responsible for supervising its implementation, coordinating the work of its other committees and resolving issues that may arise. At its inaugural meeting, members affirmed that in general the agreement is off to a good start, with U.S. exports to Korea increasing in March — including the first two weeks that the agreement was in force.

“This landmark agreement is already resulting in economic benefits through increased exports,” Kirk said. “We are working closely with our partners in Korea to ensure that the agreement is being smoothly implemented and that workers and exporters in both countries can take full advantage of the significant opportunities that this agreement creates.”

The two countries exchanged updates on their recent trade initiatives and consulted on ways to enhance cooperation on trade issues. They also agreed on the scheduling of five committees and working groups under the agreement.