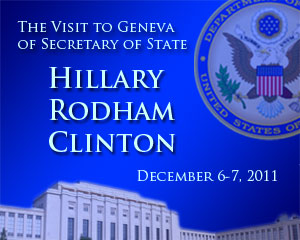 Secretary Clinton to Travel to Germany, Lithuania, Switzerland, Belgium, and the Netherlands

On December 4-8, Secretary of State Hillary Rodham Clinton will travel to Germany, Lithuania, Switzerland, Belgium, and the Netherlands.  In Bonn, Germany, Secretary Clinton will lead the United States’ high-level, interagency delegation to the International Conference for Afghanistan on December 5.  The Bonn Conference, the first of its kind to be chaired solely by the Afghan government, will be an opportunity to review progress achieved since 2001 and highlight the strong international support for Afghanistan through transition and beyond.  In Bonn, the government of Afghanistan and the international community will engage in mutual commitments to secure the gains already achieved and pave the way for an increasingly self-sustainable Afghanistan.

The Secretary will then travel December 6 to Vilnius, Lithuania, where she will participate in the OSCE ministerial, as well as meet with Lithuanian officials and with Belarusian and a wide range of other civil society representatives from across the OSCE region.

On December 6, the Secretary will visit Geneva, Switzerland to deliver remarks commemorating International Human Rights Day, which falls later that week.  On December 7 in Geneva, she will speak at the ministerial event commemorating the 60th and 50th anniversaries of the Refugee and Statelessness conventions.  The Secretary will also deliver the U.S. national statement at the Biological and Toxin Weapons (BWC) Review Conference, where we hope to revitalize international efforts against biological threats.

Later that day, the Secretary will travel to Brussels, Belgium, for ministerial-level meetings of the North Atlantic Council, the NATO-Russia Council, and with ISAF partners to discuss Afghanistan on December 7-8.

The Secretary will conclude her trip with a December 8 visit to The Hague, the Netherlands, where she will deliver the keynote address at the opening of a ministerial conference on Internet freedom that will launch a cross-regional, multi-stakeholder coalition committed to promoting the freedoms of expression, association, and assembly online.