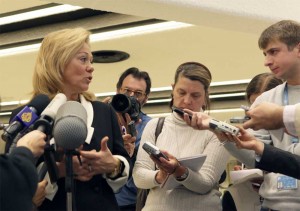 For the third time this year, we join a special session to make clear the international community’s grave concerns over the situation in Syria, where the authorities are committing mass atrocities and gross human rights violations against the Syrian people.

The Syrian people have an irrepressible hunger for a new political order. They are no longer willing to tolerate denial of their human rights and the trampling of their dignity. They are no longer willing to remain quiet about the corruption and brutality of the Assad regime. Assad and his inner circle cannot respond to these legitimate aspirations of the Syrian people, so they assault a peaceful opposition with appalling violence and terror.

The Syrian government’s violence continues to escalate. The regime is stoking the fears of Syria’s minority communities with propaganda about foreign conspiracies and domestic terrorism. Make no mistake: the regime is driving the cycle of violence and sectarianism.

Peaceful protestors have suffered mass arrests, shabiha thuggery, and extrajudicial execution. But as they are literally beaten off the streets, protestors are learning new forms of peaceful resistance such as boycotts and strikes. Security forces have responded to peaceful civil disobedience with intimidation, vandalism — and worse. According to the Commission of Inquiry report that we all have before us, security forces systemically use torture and sexual violence, even against children.

The United States welcomes the forceful report of the Commission of Inquiry. I want to highlight the Commission’s recommendations for the immediate admission and protection of human rights monitors; for the unfettered admission of international media; and for the United Nations to continue to take steps to halt the violence in Syria. This special session today, and the resolution before it, move these recommendations forward.

We once again call on the Syrian regime to immediately admit the Commission of Inquiry and grant it unfettered access throughout Syria. Similarly, Syria must immediately admit Arab League monitors, independent human rights monitors, and humanitarian organizations, with no restrictions on their activities.

We condemn in the strongest possible terms the ongoing slaughter, the arbitrary arrest, and the torture of peaceful protestors. We will continue to work with regional partners and the broader international community to pressure the Assad regime to end the violence against the Syrian people. The Syrian government’s abuses have been condemned by leaders of the Arab world, including by the actions taken by the Arab League over the past week; by other international leaders; and by the United Nations, where just over one week ago in a vote in the General Assembly’s Third Committee, 122 members of the United Nations stood together to call for an immediate end to the violence in Syria.

Our message is firm and clear:
•  To the people of Syria — the world stands by you, and we will not ignore your plight in the face of ongoing violence;

•  To the Syrian Government — the time has come to end the flagrant violations of the human rights of your people, and to allow Syrians their right to peacefully and democratically change their government.