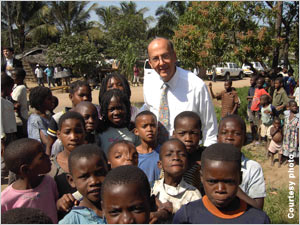 Washington — The United Nations General Assembly is ready to launch a full-fledged assault on some of the world’s greatest killers.

They aren’t terrorists or drug kingpins. They are diseases: heart disease, respiratory disease, cancer and diabetes. They are known as noncommunicable diseases (NCDs) because they aren’t passed by bugs or sneezes, coughs or sex. They are diseases that many people bring on themselves with lifestyle choices like smoking, poor diet, physical inactivity and alcohol abuse.

Communicable diseases such as HIV/AIDS and pandemic influenza attract a lot of attention, but the NCDs are more deadly, accounting for 63 percent of all deaths worldwide, according to the World Health Organization (WHO).

The U.N. General Assembly will convene a special session on NCDs September 19–20 in New York with the goal of adopting an action plan for the international health community to attack the problem.

This session emerges from the growing realization that premature deaths from these health problems impede economic development. These diseases can entrench an individual or a family in poverty because of the inability to work or the cost of medical treatment. Expand those individual difficulties to a broader scale, and they can inhibit national economic progress. The global cost of NCDs from 2005 to 2030 is estimated at $35 trillion, according to a World Bank study.

U.N. documents say the special session is scheduled because of evidence proving that strategies to reduce NCDs are going to be a “best buy” for national investment.

“If a minister of health had $1 million to improve the health of his people, where should he invest?” said Dr. Roger I. Glass, who has been involved in a global review of disease control as director of the Fogarty International Center at the U.S. National Institutes of Health (NIH). “What would be the ‘best buys’ to get the maximum improvement in life expectancy and disability-adjusted life years?”

Glass said experts have found that investing in strategies to educate people about the risks of NCDs and the lifestyle choices that promote poor health are the best investments a country can make. In an interview, Glass said the need for attention to NCDs has become increasingly urgent as populous nations like India and China have made great strides in prolonging life expectancy. The over-40 age groups are typically more prone to suffer from the long-term habits that lead to NCDs, but WHO data reveals that a significant proportion — 30 percent — of deaths under age 60 result from these conditions.

The forthcoming U.N. session is an important event to emphasize these diseases, Glass said, because the lengthy incubation periods of the NCDs allow them to slip from the spotlight of public attention. “The urgency isn’t nearly as captivating as a new viral infection.”Despite their enormous consequences, NCDs are largely preventable, and the U.N. session will develop strategies on how to emphasize that point to the global public. Breaking bad lifestyle habits such as tobacco use, poor diet, physical inactivity and alcohol abuse can significantly reduce the toll of NCDs. If these major risk factors were eliminated, calculates the WHO, about 75 percent of cardiovascular disease and Type 2 diabetes would be prevented, and 40 percent of cancer would be prevented.

When the NCDs were recognized as health “best buys” a few years ago, Glass said, the Fogarty International Center adjusted its focus to devote about half its resources to this area. The center supports basic, clinical and applied research and training for U.S. and international investigators. Fogarty established new partnerships to pursue NCD research with international institutions. Fogarty also advised and supported the National Heart, Blood and Lung Institute, another division of NIH, in a project to establish 11 centers in low- and middle-income countries devoted to research and professional training for cardiovascular and pulmonary disease.

A U.S. partnership with Costa Rican cancer researchers in recent years expanded scientific understanding of cervical cancer and developed the HPV vaccine, which can prevent this form of cancer. Administration of the vaccine “is now part of the system of health care in the United States,” said Dr. Jorge Gomez, director of the Office of Latin American Cancer Program Development, “and has been incorporated into basic health plans and benefits.”

Gomez is establishing a network of cancer researchers in the United States and five Latin American countries. A study of breast cancer in women in those five nations is getting under way, which will provide more data about the disease in this population than has ever been collected before.

Glass said this international research partnership may serve as a model for other collaborations that will result because of the U.N. focus on NCD issues. “There’s a lot we can learn from working together.” Fogarty has pursued that research philosophy for more than 40 years, facilitating exchanges among global health researchers, providing training opportunities and supporting promising research initiatives in developing countries.

The U.N. General Assembly held a special session to focus on a disease — HIV/AIDS — only one time before. Glass said global collaboration and progress against the disease took an important step forward with that meeting, and he hopes that history might be repeated September 19–20.