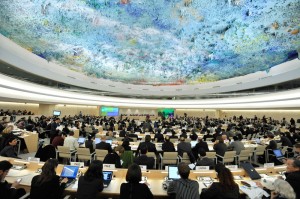 U.S. Representative to the Human Rights Council
on the “Joint statement on ending acts of violence and related human rights violations based on sexual orientation & gender identity”

“We are proud to have taken a leading role on the statement issued today at the Human Rights Council, signed by 85 countries, entitled “Ending Acts of Violence and Related Human Rights Violations Based on Sexual Orientation and Gender Identity.”  Human rights are the inalienable right of every person, no matter who they are or who they love.  The U.S. government is firmly committed to supporting the right of lesbian, gay, bisexual, and transgender individuals to lead productive and dignified lives, free from fear and violence.  We look forward to working with other Governments from all regions and with civil society to continue dialogue at the Council on these issues.“
The full text of the statement delivered at the Human Rights Council on March 22, 2011 by the representative of Colombia on behalf of 84 countries is provided below:

1.       We recall the previous joint statement on human rights, sexual orientation and gender identity, presented at the Human Rights Council in 2006;

2.       We express concern at continued evidence in every region of acts of violence and related human rights violations based on sexual orientation and gender identity brought to the Council’s attention by Special Procedures since that time, including killings, rape, torture and criminal sanctions;

3.       We recall the joint statement in the General Assembly on December 18, 2008 on human rights, sexual orientation and gender identity, supported by States from all five regional groups, and encourage States to consider joining the statement;

4.       We commend the attention paid to these issues by international human rights mechanisms including relevant Special Procedures and treaty bodies and welcome continued attention to human rights issues related to sexual orientation and gender identity within the context of the Universal Periodic Review. As the United Nations Secretary General reminded us in his address to this Council at its Special Sitting of 25 January 2011, the Universal Declaration guarantees all human beings their basic rights without exception, and when individuals are attacked, abused or imprisoned because of their sexual orientation or gender identity, the international community has an obligation to respond;

5.       We welcome the positive developments on these issues in every region in recent years, such as the resolutions on human rights, sexual orientation and gender identity adopted by consensus in each of the past three years by the General Assembly of the Organization of American States, the initiative of the Asia-Pacific Forum on National Human Rights Institutions to integrate these issues within the work of national human rights institutions in the region, the recommendations of the Committee of Ministers of the Council of Europe, the increasing attention being paid to these issues by the African Commission on Human and People’s Rights, and the many positive legislative and policy initiatives adopted by States at the national level in diverse regions;

6.       We note that the Human Rights Council must also play its part in accordance with its mandate to “promote universal respect for the protection of all human rights and fundamental freedoms for all, without discrimination of any kind, and in a fair and equal manner” (GA 60/251, OP 2);

7.       We acknowledge that these are sensitive issues for many, including in our own societies. We affirm the importance of respectful dialogue, and trust that there is common ground in our shared recognition that no-one should face stigmatisation, violence or abuse on any ground.  In dealing with sensitive issues, the Council must be guided by the principles of universality and non-discrimination;

8.       We encourage the Office of the High Commissioner for Human Rights to continue to address human rights violations based on sexual orientation and gender identity and to explore opportunities for outreach and constructive dialogue to enhance understanding and awareness of these issues within a human rights framework;

9.       We recognise our broader responsibility to end human rights violations against all those who are marginalised and take this opportunity to renew our commitment to addressing discrimination in all its forms;

10.  We call on States to take steps to end acts of violence, criminal sanctions and related human rights violations committed against individuals because of their sexual orientation or gender identity, encourage Special Procedures, treaty bodies and other stakeholders to continue to integrate these issues within their relevant mandates, and urge the Council to address these important human rights issues.