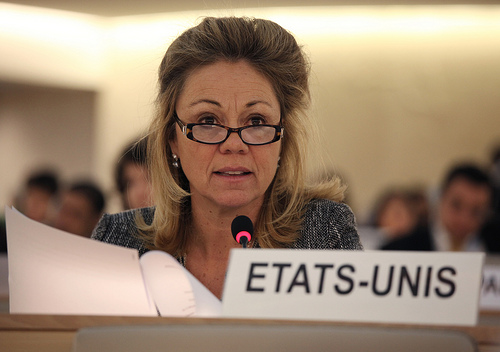 The United States is gravely concerned about the tragic situation in Libya. Violence, including airstrikes against the Libyan people, is ongoing. We especially deplore reported summary executions, rapes, torture and disappearances at the hands of Gadhafi’s supporters. We stand with the Libyan people, as they demand that Gadhafi must leave, without further violence or delay. Gadhafi’s departure is the only way to bring an end to the bloodshed and set Libya on the path toward democratic government.

The U.S. continues to work with our partners in the United Nations, NATO, the African Union, the Arab League, and the Gulf Cooperation Council to isolate and sanction Gadhafi. With our partners, we will continue to pressure him to stop the violence against his own people, and we will work to hold accountable those who enable these horrific attacks.

In the face of continuing violence, the international community must remain unified, steadfast, and committed to taking continued measures to address this mounting crisis. During the Special Session on February 25, this Council took an important first step toward highlighting the egregious human rights violations committed by the Gadhafi government, by unanimously establishing an independent Commission of Inquiry, the members of which were announced last Friday. We must support the Commission members as they carry out their work and issue their recommendations. The UN Security Council spoke with one voice to impose an arms embargo and other sanctions and to refer the situation in Libya to the Prosecutor of the International Criminal Court. The General Assembly acted in unison to suspend Libya’s membership rights in this chamber. We also welcome the Secretary-General’s appointment of Abdelilah Al-Khatib as UN Special Envoy to Libya, and look forward to working with him.

We are encouraged by reports that the Special Rapporteur on Torture; the Special Rapporteur on Extrajudicial, Summary or Arbitrary Executions; and the Working Group on Enforced or Involuntary Disappearances have launched a probe into allegations that Gadhafi’s forces have abducted, tortured, and executed opponents. We appreciate the proactive and timely efforts of these mandate holders to use their influence to identify those responsible for gross violations of human rights against the Libyan people.

We thank the High Commissioner for her report, acknowledging the short time that she had to prepare it. And we look forward to hearing more from her on this subject at the Council’s next session.

Through all of these actions, the international community is sending a powerful and unified message: those who violate their citizens’ human rights and fundamental freedoms will be held to account. We confidently hope that history will show that these efforts had an impact in upholding and promoting the rights and freedoms of the people of Libya.