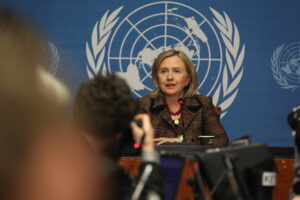 Office of the Spokesman

Remarks to the Press

SECRETARY CLINTON: Well, good afternoon.  It’s been a very busy and productive day here in Geneva, so let me give you a brief rundown.

I have been holding intensive consultations with friends and allies on developments in Libya, and these have been action-oriented discussions focused on determining the international community’s next steps to hold Colonel Qadhafi and his regime accountable for its human rights abuses and violence against its own people, to determine the best way forward after the Security Council resolution to provide humanitarian assistance to those in need, and to support the Libyan people as they pursue a transition to democracy.

It has been a remarkable international response, where the international community has been speaking with one voice, saying very clearly that Colonel Qadhafi’s brutal attacks on his own people are unacceptable and will not be tolerated.  Qadhafi has lost the legitimacy to govern and it is time for him to go without further violence or delay.

Saturday’s unanimous UN Security Council resolution was a significant beginning.  It will impose an arms embargo on Libya, freeze the assets of key human rights violators and other members of the Qadhafi family, and refer the Libyan case to the International Criminal Court.  The United States has imposed additional sanctions of our own, and today I discussed with our European allies the specific measures that they will pursue to keep increasing the pressure in further isolating Qadhafi and his regime.

As the violence in Libya continues, we are very concerned about the humanitarian situation, so we are working with the United Nations, partner nations, the International Committee of the Red Cross and the Red Crescent, and other NGOs to launch an effective, robust response.  To start, USAID, our American development agency, has set aside an additional $10 million in emergency assistance to support the efforts of organizations on the ground already to meet the most urgent needs of Libyans and of others who are guest workers or migrants who’ve been caught up in the violence and dislocation.  We are also immediately dispatching two expert humanitarian teams to Libya’s borders with Tunisia and Egypt to assist with the displaced people who are fleeing the violence.

Our immediate attention is focused on the need to keep medical supplies in the pipelines well-stocked and intact.  We are also concerned that the ongoing violence may disrupt distribution networks and led to food shortages, so we have conducted an inventory of all American food aid resources in the region and are prepared to divert or dispatch other food stocks to Libya as the need arises. Now, as we move forward on these fronts, we will continue to explore all possible options for additional actions.  As we have said, nothing is off the table so long as the Libyan Government continues to threaten and kill Libyan citizens.

I want to add that today I also had important discussions on a wide range of other key issues, including the progress of democratic transitions in Tunisia and Egypt.  In Tunisia, we welcome the interim leadership’s efforts to form an inclusive broad-based government and its pledge to hold free and open elections within six months, but we remain concerned about new violence.   We were heartened to hear from Tunisia’s state secretary for foreign affairs, whom I had a chance to meet with as well, that Tunisia will welcome the opening of a UN Human Rights office and open its doors to all UN special rapporteurs.

In Egypt, we are heartened also by the efforts that are undertaken in order to meet the commitments that have been made.  We hope that the military leaders will reach out to broad array of opposition voices and representatives from civil society to ensure that the reform process is transparent and inclusive, that it leads to free and fair elections, and that it respects the rights of women and minorities.  Egyptians are asking for concrete steps in the run up to elections, including enacting constitutional reform, releasing political detainees, and lifting the state of emergency.  And the United States stands ready to support the Egyptian people in this process as appropriate, including through economic assistance that does help promote jobs and create more opportunities.
We also discussed Iran.  I conferred with our P-5+1 colleagues about our concerns regarding Iran’s nuclear ambitions, and at the Human Rights Council I worked to support Sweden’s efforts to pass a resolution establishing a special rapporteur on Iran to investigate and report on Tehran’s human rights abuses.  The Iranian Government should allow freedom of speech and freedom of assembly without fear and should immediately end its organized intimidation campaign.

And finally, I took the opportunity to address the conference on disarmament on the need to end the dedicated production of fissile material for use in nuclear weapons and to start negotiations on the Fissile Material Cutoff Treaty without further delay.

So there is a lot that we have been working on here in Geneva today, and I’d be happy to take some of your questions.

MODERATOR: First question is from Viola Gienger of Bloomberg News.

QUESTION: Madam Secretary — can you hear on this microphone? — wanted to ask you what kind of discussions you had with your counterparts today related to a no-fly zone and the potential for that?  And also, what sort of next steps, in terms of sanctions, are you considering?  For example, any kind of restrictions on oil and gas imports from Libya, exports from Libya?

SECRETARY CLINTON: Well, as we’ve said, a no-fly zone is an option we are actively considering.  I discussed it today with allies and partners, and we will proceed with this active consideration.  When I said in my remarks that all options are on the table, or another way of saying it, no option is off the table, that, of course, includes a no-fly zone.

With respect to additional measures, the discussions that I had today focused on how we can keep the pressure on the Qadhafi regime without harming the Libyan people.  And we believe there are steps we can take that will do that.  We are very aware of the need to block access to resources and assets that the Libyan Government, particularly Qadhafi and his family, could get a hold of to continue his reign of violence against the Libyan people.  At the same time, we are well aware of the need to keep resources flowing into Libya so that the people themselves can use them to meet their specific needs, to be able to organize themselves.
So we explored a number of potential actions, many of which are more in the European theater than actions that we could take.  But I think in the coming days you will see the EU take additional steps to try to prevent the Qadhafi regime from having access to resources going forward.

MODERATOR: Our next question is from Hadat al-Denabi from Al-Ahram.

QUESTION: Madam Secretary, may I start by thanking President Obama on behalf of the Egyptian people for his stand and your pronouncements today on Libya and Tunisia.  My question is is that there is a deploying – redeployment of naval forces, American U.S. forces, close to the Libyan shores.  Is this a sign of an imminent military response?

SECRETARY CLINTON: No.  No.  First of all, we have, as you know, naval assets in the Mediterranean.  We have bases that are NATO bases and that are host country bases that we have used on an ongoing basis over the course of many years.  We do believe that there will be the need for support for humanitarian intervention.  We also know that there will probably, unfortunately, be the need for rescue missions, because, as I’m sure you’re aware, thousands of Tunisians have already left Tunisia heading for Europe.  We expect to see Libyans and others who are trapped in Libya, which presents a great danger on the high seas.  But there is not any pending military action involving U.S. Naval vessels.

MODERATOR: And our final question is from Brad Klapper, Associated Press.

QUESTION: Yes, Madam Secretary.  I’m over here.  Are you considering giving aid to the eastern Libyans defending themselves?

SECRETARY CLINTON: You know what, I cannot hear you.

QUESTION: Are you considering giving aid to east – to the eastern Libyans defending themselves against the Qadhafi regime, whether this be military aid or some sort of civilian assistance?  And lastly, would you welcome any of Qadhafi’s few remaining friends to offer him asylum?  Would the U.S. react – would it welcome, let’s say, an offer from Mugabe, for example, to offer him a soft landing to end the crisis?

SECRETARY CLINTON: Well, first, as you know, there is a considerable amount of instability at the moment in Libya, and we are just at the beginning of knowing what will follow from the regime in eastern Libya and in other parts of the country.  Our focus is on ending the abuses by the Qadhafi regime and supporting, in a humanitarian effort, those who are suffering because of the violence.  And I think it’s important to recognize that, just as in Egypt and in Tunisia before, what is happening in Libya is coming from the people of Libya themselves.  And we deeply respect that.  I appreciate the Egyptian journalist’s kind words for President Obama, which I will certainly convey.

We understand how challenging this transition is, even in a country as strong in institutions as Egypt is.  So imagine how difficult it will be in a country like Libya, which has been denuded of institutions.  Qadhafi ruled for 42 years by basically destroying all institutions and never even creating an army, so that it could not be used against him.  So the situation in Libya is so much more challenging than what’s happening in Egypt.  So our goal is to get the humanitarian relief in on the borders with Egypt and Tunisia, because both the Egyptian and the Tunisian efforts to assist in the humanitarian flow of refugees is very commendable, but they need some help.  They can’t be expected to manage all of this on their own.  And then we will be reaching out to recognized voices in the opposition who are assuming responsibility and doing what we can appropriately to assist them.  So we will definitely be following up on that.

With respect to your question about Colonel Qadhafi finding refuge somewhere – and, I mean, I was almost rendered speechless with the idea of he and Mugabe together.  (Laughter.)  I think that – we want the violence to end.  And if the violence could be ended by his leaving and ending the killing of so many people who are trying to assert their rights, that might be a good step.  But, of course, we believe accountability has to be obtained for what he has done.  And certainly, I don’t think that the international community, given the unanimity with the Security Council resolution, would just drop all of its concerns were he to leave, although leaving would be a positive in terms of ending the violence, which we would like to see.

MODERATOR: Thank you all.

SECRETARY CLINTON: Well, we’re going to wait to see how things develop, but we are looking at many different kinds of actions.

MODERATOR: Thank you all.  Thank you.