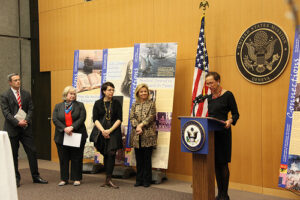 Mayor of Geneva Sandrine Salerno, Representatives of the City and Canton of Geneva, and of the Commune of Pregny-Chambesy, friends and colleagues, thank you all for being here tonight for an event that we at Mission Geneva have been very much looking forward to.

We are here to launch a new illustrated booklet published by the U.S. Mission, and to celebrate the rich and multidimensional connections between the United States of America and Geneva, Switzerland.

These connections run deep – they span centuries – and they continue to have a positive international impact today.

Geneva has a unique and special place in world affairs. In some circles we are sometimes seen as the junior partner to UN New York. Each location has a distinct and essential role to play. I like to say that Geneva is where rhetoric meets reality, where we implement the critical UN mandates, in short, where the rubber meets the road.

The work we do here has a real impact on the lives of real people around the world. Whether it is delivering humanitarian aid, promoting trade, development and the protection of intellectual property, fighting the great diseases that affect mankind, or assisting the world’s refugees and displaced persons.

The importance which the United States gives to the work done in Geneva is reflected in the scale of our diplomatic presence. We have four U.S. Ambassadors in Geneva, more than at any other of our overseas diplomatic post. I’m pleased to have with me here tonight Laura Kennedy, who is our Ambassador to the Conference on Disarmament and also the U.S. Special Representative for Biological Weapons Convention Issues, and Eileen Chamberlain Donahoe, our country’s first Ambassador to the Human Rights Council. In a few moments they will say a few words about the pivotal role of Geneva in arms control and human rights.

Our fourth Ambassador, Michael Punke who represents the United States at the World Trade Organization –the only guy among us –is unfortunately unable to be here tonight.

I would like to express our special gratitude to the two authors of our book – one Swiss and one American – who took the time to contribute such fascinating and fact filled articles. Dr. Daniel Warner, an American political scientist and founder of HEI’s program for the study of international organizations, could not be here tonight, but Danny’s writings on the Spirit of Geneva and the United States were a big part of the original inspiration behind this project.

Additional encouragement flowed to us from the Foundation and Museum of the Swiss Abroad which is located right across the street. The Foundation’s long-time president, Ambassador Benedict von Tscharner, wrote for us a wonderful account of Woodrow Wilson’s role in the birth of what we know today as “International Geneva.”

So many others have embraced this project, encouraged us and helped us along – Geneva’s Office of Protocol, the Office of the Delegate to International Geneva, the Museum of the Reformation to name just a few.

Our book “Connections,” is not a commercial venture. It will be made available free of charge – as long as our print run lasts – to our multilateral partners in Geneva and to the many diplomats, officials, civil society and student groups who visit this Mission. We hope that it will inspire others to continue to learn about the history of Geneva, the history of the United States and the importance of multilateral diplomacy.

The book contains a lovely account of Geneva hospitality written over 200 years ago by an American journalist for Harper’s Magazine. While in Geneva to cover the Alabama Arbitration he sent home the following dispatch:

“Party succeeded party, fete followed fete…In short, both government and people spared no pains to make the stay of their distinguished guests as pleasant and comfortable as possible.”

I am delighted to note that 200 years later I could express similar sentiments in my cables to Washington, but I won’t for fear they will end up in Wikileaks.

With that I would like to give the floor to a distinguished representative of the Canton of Geneva, Mr. Olivier Coutau, the Delegate to International Geneva.

Note: Mr. Coutau’s remarks are available on the Canton of Geneva website.