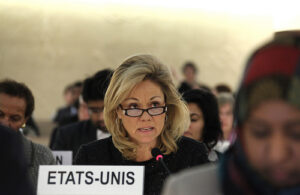 “Situation of human rights in the Libyan Arab Jamahiriya”

(As delivered)
Thank you, Mr. President.

The United States strongly supports the convening of this special session to address the crisis in Libya. The Government of Libya has a responsibility to protect its population. It is failing to do so. In fact, it is attacking its population. The Human Rights Council has a responsibility to take action in response to ongoing emergency situations like the one in Libya, where a government is continuing to commit gross and systematic human rights violations. The Council’s responsibility is even greater when the violator is one of its own members. By convening this session on an urgent basis this week, the international community is sending a strong, unified and clear message that the Libyan government’s violations of human rights are clearly contrary to international norms and must end.

Over the past several days, we have watched with alarm as demonstrators have been met with repression and lethal violence from their government, including threats and orders to shoot peaceful protesters and further punish the people of Libya. Reports indicate that the death toll is several hundred at least. This bloodshed is completely unacceptable, and the violence is deplorable. It must stop immediately.

We recognize the courage and determination of the Libyan people who have opposed this repressive government. From air force pilots who have refused to carry out unconscionable orders, to Libyan diplomats who have spoken out against their government’s atrocities, to the men and women who peacefully assemble in the street with aspirations to a better life—the United States stands with you in support of freedom, justice, and the dignity of all people. To those who have been injured or lost loved ones during the violence, the people of the United States extend our deepest sympathy and condolences.

It is deeply disappointing that human rights are being so blatantly violated by a member of this Council. We note that the UN General Assembly has the authority to suspend the membership rights of a Council member who is committing gross and systematic violations of human rights. The continued participation of Libya in this forum undermines the core mission of the Council and its mandate and goals.

Two days ago, President Obama clearly announced that the United States “strongly supports the universal rights of the Libyan people. That includes the rights of peaceful assembly, free speech, and the ability of the Libyan people to determine their own destiny. These are human rights. They are not negotiable. They must be respected in every country. And they cannot be denied through violence or suppression.”

Our President also said that “it is imperative that the nations and peoples of the world speak with one voice,” and that is our purpose here. We urge this Council to adopt a resolution that condemns the human rights violations of the Libyan government in the strongest terms and underscores the need for accountability of those individuals responsible for the crimes perpetrated and establishes an independent commission of inquiry. The dignity and humanity of the Libyan people demands nothing less.