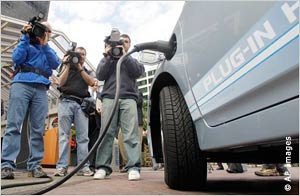 In his January 25 State of the Union address, President Obama challenged the United States to become the first nation with 1 million electric cars. His administration since has announced several initiatives it will ask Congress to fund in the 2012 budget to help spur such rapid growth.

Some experts have questioned whether the goal President Obama set in his speech is realistic, considering that the market for electric cars is still in its infancy.

A new report from Indiana University says automakers’ production targets won’t be sufficient to generate 1 million electric cars by 2015 — mainly because consumer demand isn’t yet there.

“We believe that [plug-in electric vehicles] are an idea whose time has come,” said Gurminder Bedi, chairman of the panel that authored the report and a former Ford Motor Company executive.

“But it’s clear that the technology needs a redoubled investment in time, energy and money from both government and the auto industry before [these cars] become part of our automotive mainstream,” he added.

Brad Berman, the founder and editor of PluginCars.com, is more optimistic, noting that the first two electric cars aimed at the mass market — the Chevy Volt and Nissan Leaf — have received rave reviews.

“Most forecasts peg sales … to ramp up from tens of thousands per year in the first year or two to hundreds of thousands by 2013,” he said. “While it’s hard to predict exact numbers, these two models alone will get us well past the halfway mark toward the 1 million goal.”

A number of additional cars will hit the market over the next two years, adding to the overall volume, he said.

So one of the initiatives in the president’s budget proposal is a $7,500 rebate, or immediate price reduction, for electric cars. Today, consumers can claim a $7,500 tax deduction, with the saving not available for months.

In addition, the president will ask for $10 million to be awarded to communities that encourage the conversion to electric vehicles — for example, by building special road lanes and parking spaces for such cars, or by training people to work in the advanced vehicle technology industry.

The expensive and relatively short-lived batteries for electric cars remain the big stumbling block to development of a mass market.

The Obama administration therefore is asking Congress to boost funding for electric-car research and development by 30 percent. A new “Energy Innovation Hub,” meanwhile, would focus on improving battery life and capacity.

“We’re going to have batteries that go 300 miles [483 kilometers] on a charge, with 10 [dollars] of electricity instead of 50 [dollars of gasoline],” Vice President Biden said during a recent visit to a battery company in Indiana.

The company Biden visited, Ener1 Inc., received a $118.5 million grant from the U.S. Department of Energy in 2009 to expand its production of lithium-ion batteries. The investment will allow Ener1 to ramp up production to 60,000 electric-car batteries annually and to triple employment to 1,400 by 2013, depending on demand, a company spokesman said.

Ultimately, gasoline prices may determine the market for these new cars, Berman said.

“If the price at the pumps makes a run to $4 or even $5, consumers are likely to flock to electric cars — which can be fueled for the equivalent of around $1 a gallon,” he said.

Even with these uncertainties, many think sales will soar in coming years, especially as vehicle prices come down.

Pike Research, a consulting and research company focused on environmentally friendly technology, estimates that there will be 835,000 electric cars or hybrids on American roads by 2015. That would be a significant increase in just a few years.

Carmakers seem to be growing increasingly optimistic. In late January, General Motors announced that it would speed up production of the Chevy Volt in response to growing customer interest.

“We’re accelerating our launch plan to have Volts in all participating Chevrolet dealerships in every single state … by the end of this year,” said Rick Scheidt, a General Motors marketing executive. “This is the right thing to do for our customers and our dealers who are seeing increased traffic onto their showroom floors.”

The company quoted one Maryland dealer who said he’s now getting serious inquiries from at least 10 customers a week.

(This is a product of the Bureau of International Information Programs, U.S. Department of State. Web site: http://www.america.gov)