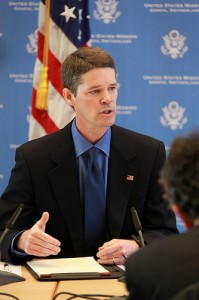 United States Statement as delivered by

Thank you, Director General. Let me start by joining others in offering our condolences to Argentina concerning Nestor Stancanelli. I only met him once, but I know from my colleagues about his contribution to this institution.

Mr. Director General, thank you for your assessment of the current situation—which we generally share.

Looking at developments since the start of the new year gives cause for both concern and cautious optimism.

There is cause for concern because the window of opportunity is truly narrow and we have not, as yet, seen Members make the pivot from talking substance to resolving substantive issues.

But at the same time, there is cause for cautious optimism in that we are hearing almost all Members recognize, and in fact call for, a true spirit of give and take.

Gatherings over the last week have indicated that there seems to be a new mood and a better atmosphere for negotiations. Most Ministers want to get beyond sterile debates of the past and they are looking to Senior officials and Ambassadors to roll up their sleeves and get the job done.

As we have said before, the first step towards success is to avoid the mistakes of the past.

We will not achieve success by the distraction of deadlines; which is a bit like making hotel reservations at a nice resort while not making the reservations to get there. The most important deadline, from the perspective of the United Stated, is now. We must begin serious negotiations now –or we will fail to profit from the current window of opportunity.

At the same time, there are no detours around the hard work that lies in front of us in each market access pillar. There are no blanket prescriptions, or over-arching formulaic solutions that will determine what individual Members will be able to accept in terms of final, horizontal trade-offs.

At the end of the day, there is simply no substitute for the act of sitting across the table from one another engaging, negotiating, and working through the issues in problem-solving mode.

It is clear that we are at a cross roads.

If we are going to seize the current window of opportunity we need to shift to the type of give and take discussions that our Leaders and Ministers have called for. We need breakthroughs soon on major roadblocks. And we do not subscribe to the notion of inherent balance in the 2008 package. By contrast – the cloth woven in 2008 has major holes – including widely acknowledged unfinished work in services and sectorals. Balance can only be achieved by completing our work in all areas.

The United States has made it clear, from the highest level, that we are ready, willing, and able to engage in a process of give and take on all fronts – bilateral, plurilateral, and multilateral. Give and take, though, can only take place at the negotiating table – not as a price of admission for sitting at the table.

We fully understand that Members are looking at all the major players to play a leadership role in moving the negotiations forward, building, of course, on existing progress. We are ready to join with others in doing so, without forgetting that in the end all Members need a package that they can support and call their own.