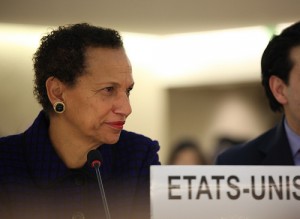 As prepared for delivery

The United States is very pleased that the Council is holding this special session to address the ongoing crisis in Cote d’Ivoire. The membership of the Human Rights Council has a strong interest in speaking up in this emergency situation to help prevent further violence. By convening this session on an urgent basis this week, the international community is sending a strong, unified and clear message that the democratic processes in Cote d’Ivoire will be supported and human rights abuses and violations in will not be tolerated there. The decision of the African Group to lead this session also sends a strong signal of common purpose and commitment to ensure respect for human rights, and to address the most serious abuses.

The United States deplores the growing violence and recent human rights violations and abuses occurring in Cote d’Ivoire and the deterioration of security. We deeply regret the loss of life during the demonstrations and call for all Ivoirians to remain calm and peaceful. Reports of mass human rights violations and abuses, including enforced disappearances, targeted killings, arbitrary detentions, and intimidation of those that oppose former President Gbagbo, as well as the discovery of possible mass graves, must be investigated. Hundreds have been arbitrarily arrested or detained, and we have credible reports that almost 200 people may have been killed already, with dozens more likely tortured or mistreated, while others have been snatched from their homes in the middle of the night. Reports continue to come in about these violations and abuses in Abidjan districts such as Abobo, Adjame, Yopougon, Williamsville, Port Bouet, Koumassi, Treicheville, as well as towns like Grand Bassam, Agboville, Tiebissou, Toumodi, Yamoussoukro, all with high concentrations of people who are either supporters of the legitimate president or are members of the Dioula, Senoufo, or Baoule ethnic groups.

We are also disturbed by reports that Gbagbo-controlled media outlets are encouraging a resumption and expansion of the conflict that ravaged the country by broadcasting hate speech, fabricating information, and calling for violence against members of the international community, members of particular ethnic groups, and all Ivoirians that oppose former President Gbagbo. We strongly urge all parties to stop such provocations, restrictions, intimidations and threats on journalists and independent media.

The UN Operation’s Human Rights Division in Abidjan is doing critical work documenting and investigating claims of human rights abuses and violations. However, their movement is being severely restricted and UN staff are being harassed and threatened throughout the country and UN forces have already been attacked. The Human Rights Division has formed a nationwide task force to investigate possible human rights abuses and violations, and they must be allowed to carry out their work unobstructed. Attacks on the vital work of the United Nations must be universally condemned and rejected.

We welcome efforts by the African Union, the Economic Community of West African States (ECOWAS), the United Nations, and countries in the region to assist in restoring peace and stability in Côte d’Ivoire. Today, we stand united in this Council, and with the international community, in support of the people of Cote d’Ivoire in their rightful exercise of democratic processes and condemn all human rights violations and abuses in Cote d’Ivoire. We call for the immediate end to the violence and the other abuses and violations, and will work to ensure that those responsible for these human rights violations will be held accountable. President Alassane Dramane Ouattara is the legitimately elected leader of Côte d’Ivoire. The rights of the Ivoirians can only be fully realized when the will of the people is respected and democracy and the rule of law is restored in Cote d’Ivoire.