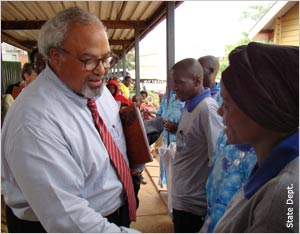 World AIDS Day is both a day of remembrance and a day of celebration. We must all keep in our thoughts those who have lost their lives to AIDS. It’s in their honor that we work every day to provide HIV prevention, treatment and care to millions across the globe.

Yet, it’s also a day to celebrate those whose lives have been improved and saved thanks to global efforts to fight this devastating disease. On this World AIDS Day, we must all agree that we have a shared responsibility to build on the success achieved to date by making smart investments that will ultimately save more lives.

And there is much success to build on. Globally, about 5.2 million people in low- and middle-income countries were on HIV treatment at the end of 2009. The United States’ President’s Emergency Plan for AIDS Relief—or PEPFAR as it is commonly known—was a major contributor to the increase, supporting treatment for nearly 2.5 million people through September 2009, up from approximately 1.7 million in the previous year.

U.S. support continues to grow despite difficult economic times. In addition to requesting the largest increase in PEPFAR funding ever, President Obama has put forward an ambitious United States’ Global Health Initiative, the next chapter in our nation’s global health efforts. With PEPFAR as its cornerstone, the Global Health Initiative is an investment in partnerships that will save lives, promote social and economic progress and build a more secure world.

Going forward, in addition to doubling the number of babies born HIV-free, the United States, working with our partner countries, will support the prevention of more than 12 million new HIV infections, HIV treatment for more than four million people, and care for more than 12 million people, including five million children and orphans. Through U.S. investments in the Global Fund to Fight AIDS, Tuberculosis and Malaria, many more people will also benefit from prevention, care and treatment. The United States is proud to be the Global Fund’s largest donor, providing more than $5.1 billion to date. This October, the Obama administration made the United States’ first-ever multi-year pledge of $4 billion, representing a 38 percent increase in U.S. support for the fund.

The United States is also becoming smarter about how we’re making investments. Experience has taught us how to use every dollar invested in battling HIV/AIDS more effectively and efficiently. This means every dollar is going a little further, allowing us to do more to combat HIV/AIDS as well as other global diseases. It also means that e can now measure our success not just in dollars invested, but in the ultimate measure of success—lives improved and saved. From investing in greater use of generic drugs to switching from air freight to water and land transportation, we are using our money wisely for greater impact.

On this World AIDS Day, we honor the lives lost and celebrate the lives saved, but we do not dare rest. Working together, we must remain dedicated to building on success by making smart investments to save even more lives.