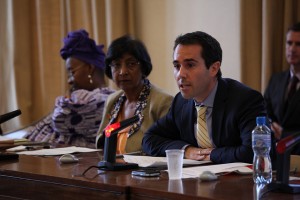 The United States is pleased to have been a co-sponsor of the September 17, 2010 panel discussion “Ending Violence and Criminal Sanctions on the Basis of Sexual Orientation” at the United Nations Office in Geneva during the 15th Session of the Human Rights Council in Geneva.

The panel brought U.N. High Commissioner for Human Rights Navanethem Pillay, and human rights defenders from three regions: Alice Nkom, a lawyer and activist from Cameroon, David Clarke, from the Society Against Sexual Orientation Discrimination in Guyana and Sunita Kujur, from Creating Resources for Empowerment in Action, India.

United Nations Secretary-General Ban Ki-moon sent a written message (PDF 269 KB) appealing for an end to the criminalization of people on the basis of their sexual orientation or gender identity.

“The responsibilities of the United Nations and the obligations of States are clear,” the UN Secretary-General said in a message which was read to the group by High Commissioner Pillay. No-one, regardless of their sexual orientation or gender identity, should be subjected to torture or to cruel, inhuman or degrading treatment.”

In a special video message (PDF 259 KB) recorded for the session, Archbishop Desmond Tutu said “Sexual orientation like skin color is a feature of our diversity. How sad it is that when God’s children are facing such massive problems – poverty, disease, corruption, conflict – we are so often obsessed with human sexuality.”

“Is there not already too much hate in this world, without also seeking to persecute those who love?” Archbishop Tutu asked.

“The human rights of LGBT people are not a gay issue, they are a human rights issue,” Baer said in introducing the panel.

“Our first task, I believe is to frame this squarely as a human rights issue and demand that it be tackled as such,” Pillay said. “… Redressing this situation is a test of our existing human rights framework and international human rights institutions.”

“Men are just as responsible for advocating for and supporting the protection of women’s rights as women are. Straight people who are committed to human rights should be concerned with the protection of those rights for LGBT people. So we should reject the myth that women’s rights are women’s work, or that advocating for LGBT human rights is only the job of the LGBT community.”

In thanking the activists, Baer recognized their courage and said, “When we talk about human rights we often think about those courageous people on the frontlines like you, and the importance of freedom of expression and association for the work you do on behalf of others. But for most of us, human rights are experienced in simpler ways, for us human rights are enjoyed in–as Eleanor Roosevelt said– “small places” close to home. Human rights create the space for us to laugh, cry, worship, celebrate and live our lives with the people we love, and that universal experience is what is behind the conversation we had today.”

“The United States sponsored this panel because we are committed to standing up for the rights of the marginalized, and to making a difference to human rights defenders and victims on the ground,” said Ambassador Eileen Chamberlain Donahoe, U.S. Representative to the Human Rights Council.

“As Secretary Clinton has stressed, LGBT rights are human rights. For too long people have been subject to violence- even death – or put in jail because of who they love. We stand with those who say that this is wrong, and we’ll continue to work with those who want to raise the visibility of these issues at the Human Rights Council,” the Ambassador said.