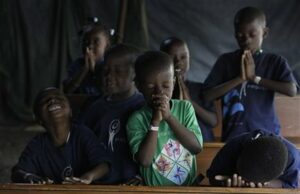 PORT-AU-PRINCE, HAITI – The first school built under an innovative public-private partnership was opened today by the Digicel Foundation and the U.S. Agency for International Development (USAID). École Louis de Borno in Léogâne, the town which was epicenter of the earthquake, now stands ready to welcome 600 primary students when the new school year begins on October 4th.

The school is the first of 50 planned by the Digicel Foundation, providing permanent and transitional schools for up to 30,000 children, at two school shifts per day. Under the USAID partnership, some of these schools will be constructed with US military shipping containers which are being converted into school campuses to replace those destroyed in the earthquake.

USAID procured about 100 shipping containers that had been used as part of the Joint Task Force-Haiti’s humanitarian mission in the aftermath of the earthquake. The school in Léogâne will also receive a generous donation of classroom and reference books from the U.S. Embassy in Haiti’s Public Affairs Section.

“We are very happy to see the work of so many people come to fruition today,” said Mme. Josefa Gauthier, Executive Chairman of the Digicel Foundation. “The Foundation, USAID, IDEJEN, engineering company Kentz and the management of the school have created something totally new in response to the needs of Haitian children after the earthquake. I am especially pleased that the school offers such a child-friendly learning environment compared to other transitional options.”

The project is also employing youth for the construction of the schools through the USAID-funded IDEJEN livelihood initiative. IDEJEN provides out-of-school youth ages 15 to 24 with basic, non-formal education and vocational training. This effort, which will employ up to 100 people at a pre-fabrication plant in addition to those on site assembly, will serve to get money to Haitian families in need, stimulate the economy, and help develop a workforce able to participate in upcoming reconstruction efforts.

Immediately after the earthquake, in which 4,800 schools were damaged or destroyed, the Digicel Foundation committed to building 50 schools. Up to 15 will be modular schools, with on average six 51-square-meter classrooms. Each classroom is composed of two specially ventilated 20-foot shipping containers. The schools will also have administration offices and sanitation, and will be furnished with school desks, benches and blackboards by the Foundation. The modular schools have a construction time of about four weeks on site and although considered transitional, can last up to 10 years if necessary.

“In the aftermath of the earthquake, in which so many schools were destroyed and livelihoods interrupted, the need for this work is even more critical,” said USAID Haiti Mission Director Carleene Dei. “This partnership with Digicel illustrates USAID’s commitment to exploring new and innovative approaches to addressing these challenges. This unique effort will simultaneously help tackle the educational, economic development, and job-training needs of Haitian communities through the more than fifty school construction projects planned.”

Work is already beginning on the next sites, also in the Léogâne area, for modular schools constructed through this partnership.

About the Digicel Foundation

The Digicel Foundation Haiti was established by the mobile telecommunications company Digicel in 2007 to support education and community projects throughout Haiti. For more information, go to http://www.fondationdigicelhaiti.org/