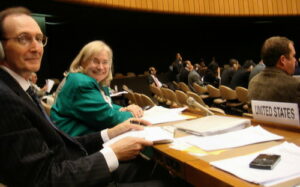 My delegation is pleased to welcome you to the Chairmanship of the 2010 Biological Weapons Convention meetings. We appreciate your willingness to take on this task, and are committed to supporting your efforts, both this week and through the rest of the year.

The topic of our discussions this week is “effective action on the provision of assistance and coordination with relevant organizations upon request in the case of alleged use of biological or toxin weapons.” Confidence that such assistance will be available strengthens the Biological Weapons Convention. If commitments to provide assistance are real, credible, and effective, they can serve as an incentive for States to join the Convention, and a deterrent to those who might consider using biological weapons. The United States takes this issue very seriously. International partnerships are central to the U.S. National Strategy for Countering Biological Threats issued in November of last year. We work on a number of fronts to build both national and international capacity for effective response to an actual or suspected biological attack, including effective coordination and assistance, and most importantly we work to ensure that such attacks never happen.

Throughout the week, U.S. experts – often jointly with international partners – will describe ways in which we contribute to this objective. In a moment, I will briefly outline the topics of these presentations. At the outset, however, I would like to make two important points:

First, the presentations you will hear this week are only a part of the overall U.S. contribution in this area. We have a wide range of programs and engagements aimed at strengthening international response to a biological or other WMD attack or natural disease outbreak. For example, our Anti-Terrorism Assistance program provides training in crisis management and in CBRN response to governments around the world. Our Foreign Consequence Management Program was established to coordinate rapid, effective U.S. response to international requests for assistance in the event of chemical, biological, nuclear or radiological high-consequence events. Our new Strategy has identified promoting global health security – specifically, strengthening the capacity of international partners to detect, report, and contain outbreaks of infectious disease—as a key U.S. objective. And the contributions of our Department of Health and Human Services and its Centers for Disease Control and Prevention to international response to disease outbreaks of any kind are well known.

Second, effective action on the provision of assistance cannot begin with a case of use or alleged use. In our domestic efforts, the United States has come to appreciate that the key to effective response to a biological event – whether we are dealing with an event on our own territory or assisting others – is preparedness. It is the steps that we take before an event that determine how successful we will be in dealing with an attack, or other disease outbreak, should it take place.

But that idea needs to be taken one step further. It is not only our preparedness that is important, but also the preparedness of other nations. We first learned this lesson in our efforts to design a federal response to an attack on U.S. soil, where it quickly became apparent that for our national response to be rapid and effective, entities at the state and local level also needed to be prepared. As a result, we have launched major domestic efforts to build capacity and preparedness at the state and local levels across the United States .

It is also important to work before such an event to identify and resolve legal, regulatory, and other barriers to effective multilateral cooperation, such as inconsistent standards for forensic identification of agents, vaccine liability, and licensing for emergency use of medical countermeasures. These are not easy issues, but their resolution is important for a truly effective international response to a biological incident.

Response to a suspicious outbreak or BW attack is likely to involve many sectors of government and society. There are investigatory elements, through which we may seek to determine what sort of illness we are confronting, whether it has been deliberately caused, and if so, by whom. There are public health elements, including the rapid identification and treatment of those who have been exposed, and evidence-based steps to prevent further spread. Depending on the circumstances, there are also very likely to be other legal, political, and security-based elements to response. International assistance may address any or all of these facets. Later this week, experts from the CDC and FBI will discuss how they work together to investigate suspicious disease outbreaks to determine their origin—and will also talk briefly about the training in this area that they have provided to their counterparts in other countries. Other U.S. experts, together with colleagues from Switzerland and Georgia, will discuss lessons learned from two international exercises exploring different aspects of coordinated international response to bioterrorism; we will have presentations during the poster session on distinguishing deliberate from natural outbreaks; decontamination of bioterrorism agents; and the U.S. domestic framework for public health and medical response to a major biological incident, whether natural, accidental, or deliberate in nature.

The expert exchanges this week and the meeting of BWC States Parties in December can promote effective action in the areas of coordination, assistance, and response. Expert discussions can identify both capabilities and gaps; we can identify practices and principles that should be more broadly embraced, and we can identify impediments to cooperation and assistance that the international community should work to address. The United States considers this to be important work, and I and the rest of the U.S. delegation look forward to this collaborative effort.