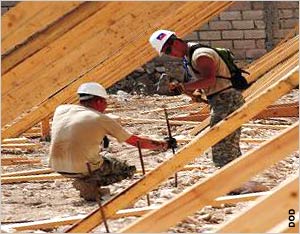 The U.S. military, which provided rapid support in the earthquake’s immediate aftermath, is now supporting the reconstruction process through medical and engineering projects in a military exercise called “New Horizons.” Units from the Louisiana Army National Guard are providing humanitarian services to Haitians in an exercise that aims to continue U.S. military help for Haiti following the seven months of actions to support earthquake relief.

More than 2 million people were displaced by the January 12 earthquake and its aftershocks, and approximately 1.5 million still remain in relief camps. The earthquake destroyed or paralyzed the island nation’s center of government, commerce and culture, and killed about 230,000 of its citizens.

“The New Horizons mission shows the commitment between the United States and the people of Haiti,” said David Lindwall, the U.S. Embassy’s deputy chief of mission in Haiti. The international collaboration with the Task Force Kout Men effort also reflects how many helping hands are committed to the recovery of Haiti.

New Horizons is a U.S. Southern Command-led international humanitarian effort that began in June and continues through September. The exercise involves about 550 troops operating as Task Force Kout Men, which means “helping hands” in Creole, reflecting the spirit that the Army National Guard feels for the Haitian people.

The task force commander, Colonel Michael Borrel, says it is a pleasure to give back. “So many from the U.S. and the international community came to Louisiana’s aid following hurricanes Katrina and Rita that it makes me proud as a U.S. military officer to come here to do something for the Haitian people,” he said.

Throughout the duration of the exercise, Task Force Kout Men will be assisted by other National Guard units from Arkansas, Oregon, the Virgin Islands, Montana, Missouri, Texas, South Dakota and Indiana. The task force will also be supported by U.S. Navy, Air Force and Army personnel. In the United States, National Guard personnel are part of the nation’s reserve military forces.

The Haitian government designated the area around Gonaives as the project site for New Horizons. Gonaives is the sixth-largest city in Haiti, and is located about 110 kilometers north of the capital, Port-au-Prince.

Assistance is needed outside of Port-au-Prince to help regions that absorbed the people who left the capital. It is estimated that between 50,000 and 100,000 displaced people migrated to the area around Gonaives, placing a strain on the area’s limited resources.

With an estimated 20,000 displaced children, one major aspect of the mission is to help build and repair local schools.

Latrines will be built along with the schools, and water-well enhancements at all the sites will provide the students and faculty with access to water through hand pumps. The well projects are being worked on in collaboration with the U.S. Navy.

Borrel said the schools are built with reinforced concrete. This makes them more resistant to earthquakes and hurricanes.

During the first three weeks of the exercise, more than 12,000 patients were treated in Saint Marc, L’Estere and Poteau.

Also taking part in the mission is the Navy amphibious ship USS Iwo Jima, which visited the Port-de-Paix area in July. The ship’s crew included military and civilian medical professionals who provided health care to thousands of Haitians.