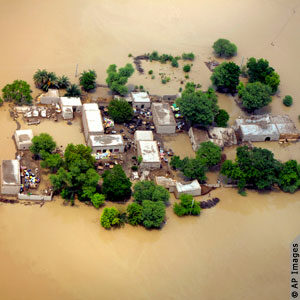 Two U.S. Navy MH-53E Sea Dragon helicopters arrived in Pakistan today as part of the continued U.S. humanitarian assistance to Pakistan in support of flood relief from the monsoon floods.

The two aircraft are part of the contingent of 19 helicopters urgently ordered to Pakistan on Wednesday by U.S. Secretary of Defense Robert Gates. The incoming aircraft flew into Pakistan today from aboard the USS Peleliu, which is positioned in international waters in the Arabian Sea. They will join the four U.S. Marine Corps CH-53E helicopters and one other MH-53E helicopters which arrived earlier this week at Ghazi Air Base, bringing to seven the total number of aircraft in Pakistan from the USS Peleliu.

The remaining aircraft will arrive over the next few days and will include 12 U.S. Marine Corps CH-46 Sea Knight helicopters. The U.S. helicopters will operate in partnership with the Pakistan military throughout the country’s flood-affected areas.

Since August 5, the U.S. military helicopters have rescued more than 3,500 people and transported more than 412,000 lbs. of emergency relief supplies in spite of bad weather.