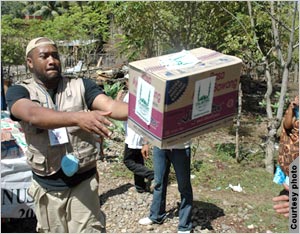 Muslim Americans dedicate their lives to helping others in America and abroad, year-round.

Washington — As is the case with Muslim communities around the world, Ramadan for Muslims in America is marked by fasting and charity. But while fasting is observed one month of the year, many Muslim Americans make charity and giving back to their communities year-round activities.

Muslim-American relief organizations highlight Islam’s charitable spirit, and their role this past year has taken them overseas. In Haiti, both Islamic Relief USA and the Zakat Foundation continue their efforts to help Haitians who still struggle in the aftermath of last January’s catastrophic earthquake. Both groups are now working to help Pakistanis suffering from the latest devastating floods that have displaced millions of people.

Khalil Demir, executive director of the Zakat Foundation, said his organization’s relief work in Haiti is supported by people’s generosity, which it continues to receive.

“There has been a huge response from people to our request for aid,” Demir said. “It is the same here as it would be in Muslim countries — we have been receiving donations nonstop.”

For Ramadan, the Zakat Foundation holds a program to bring relief to people in 34 countries, including the United States.

And it’s not only Muslim-American organizations that choose Ramadan as a time to help others. Individual citizens, like New York’s Yusuf Ramelize, tap into their spirit of generosity to help those who are less fortunate.

For the second year in a row, Ramelize will undertake his Homeless for One Week project. Ramelize, a graphic artist and photographer, uses the event to draw attention to the plight of the homeless on New York’s streets. But unlike last year, his week on the street will include fasting for Ramadan starting from August 15.

“Fasting puts me in touch with my connection to humanity on a very deep level. It allows me to feel a sense of gratitude for all of my blessings and to realize the pains of those who go without the bare minimum every day,” Ramelize writes on his Homeless for One Week website.

During his week on the streets, Ramelize documents his experiences and interviews homeless people with a video camera. He also uses the program to raise money for a charity that works with the homeless. Last year, he raised money for the Coalition for the Homeless, and this year he will collect funds for the Food Bank for New York City.

While Ramelize raises awareness and funds for the homeless, two Muslim-American women are making sure that Muslim children in the United States who are living at or below the poverty line receive an Eid Al-Fitr gift.

Hadayai Majeed, co-founder of the Baitual Salaam Network, started the National Eid Toy Drive last year when she saw a need for it in her community. This year, Debbie Al-Harbi, of Muslim Toys & Dolls, joined her in not only raising money for the project, but also in sending the presents nationwide.

“I wish I could be there when they open the gifts to see the joy on their faces,” Al-Harbi said. “I just believe that it is Allah working with me. I don’t take credit.”

Statement by the President on the Occasion of Ramadan (Aug 11, 2010)