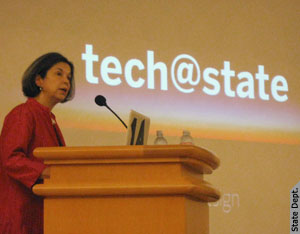 Washington — Global cellular phone coverage has far outpaced the expansion of essential services such as water and electricity, as well as access to financial services. For this reason, “mobile money” is seen as a means to transform the notion of banking around the world, and broaden access to credit, insurance and secure savings that are desperately needed in the developing world as individuals seek to enhance their well-being and emerge from poverty.

The rapid proliferation of cellular phones around the world “has changed the course of human development,” Under Secretary of State for Democracy and Global Affairs Maria Otero said August 2 at the State Department conference “Tech@State: Mobile Money and Financial Inclusion.”

Yet, at the same time, 1.7 billion low-income cell phone users do not have a bank account. In effect, they “remain outside of the realm of economic opportunities that is represented by financial access,” she said.

Through their phone connections, small business owners, farmers and others either living in rural areas or at the bottom end of the socio-economic pyramid are obtaining the ability to communicate instantly and transfer funds to individuals and institutions. The service provides a quick, secure and transparent means of performing transactions. The widespread dissemination of cellular phones also means that the relative few without a phone likely will have a close friend or relative they could turn to for the same purposes.

“Financial opportunity shouldn’t be limited to those with traditional assets or credit stories that a bank can respect,” Otero said. Microfinance efforts have shown that the poor are credit-worthy and pay back their loans despite not having assets or working capital. They have demonstrated both entrepreneurship and drive to succeed, she said.

“Microfinance has demonstrated how low-income men and women are dignified by the opportunity to manage a business, build their business and make better economic decisions for their families,” she said.

The conference brought financial, technology, development and other experts together to discuss the current and potential uses of mobile money, and how to solve existing problems and amend regulations to allow even greater participation.

Otero said the State Department, together with the Treasury Department and the U.S. Agency for International Development, can play a role in expanding mobile financial services around the world both as a convener of state, commercial and nonprofit entities, and by working with foreign governments to create more political will for effective regulatory practices.

While 5 billion of the world’s 6.6 billion people have mobile phones, only about 1.6 billion have bank accounts. Of those, only 1 billion are fully served by traditional banks, according to Carol Realini, the chief executive officer of Obopay, a mobile payments company. She cited a “natural ceiling on banking,” and pointed out that mobile money potentially could account for $10 trillion in retail payments and $400 billion in remittances sent from overseas friends and family,

“I think within five years, we are going to transform the planet,” Realini said. “It has already started in some countries like Kenya and India, and what you’re going to see is it’s going to start to be a wildfire around the planet.”

Shainoor Khoja of Afghanistan’s Roshan cellular service provider highlighted the importance of mobile transactions in her country, where she said there are only 17 banks and 34 automated teller machines, which serve only 3 percent of the population. At the same time, an estimated 23 percent of Afghanistan’s gross domestic product is given away in bribes.

“The alternative to mobile money in Afghanistan is cash,” she said. People must carry around large amounts, sometimes in safes, and when employees are paid “they get shaken up by whomever wants to shake them up.”

“In Afghanistan, 59 percent of the population complain that corruption and bribery is a bigger problem than jobs and security,” Khoja said. Along with enabling secure and transparent transactions to reduce theft and corruption, mobile money also potentially could serve the illiterate in Afghanistan and elsewhere through voice recognition systems and programs that can read text messages out loud.

Menekse Gencer, the founder of mPay Connect, a company that provides consulting services to clients interested in providing mobile payments services to their customers, said mobile money can also provide the foundation for food security.

She highlighted a “vicious cycle” that currently exists in some developing countries, where a drought or bad harvest will devastate farmers, who then need to focus whatever resources they have left toward providing for their immediate families, rather than working and reinvesting in seeds or other material to produce more output. As a result, the food supply shrinks and food prices rise, sometimes leading to health consequences like malnutrition or HIV/AIDS if individuals enter the sex trade to make ends meet.

In Kenya, where 70 percent of the population relies on agriculture for income, the Syngenta Foundation has been using mobile technology to insure small farmers against drought and other conditions. When the harvests are damaged or lost, subscribers automatically begin receiving insurance payments through their phones.

“Now, with this insurance, it enables them to invest back into their farming — into good seeds and fertilizers, which they couldn’t do before because essentially they were worried that if they put that money into investing in their farms, what happens if the droughts come and they can’t buy food?” Genser asked. “Suddenly, some of that vicious cycle … is suddenly freed up through this microinsurance.”

Closing the conference, Caroline Mauldin, who works in Under Secretary Otero’s office, said the conference marked “the beginning of a conversation for us,” as the State Department seeks expertise and recommendations on how to expand access to mobile money around the world.

There is an “alignment of market forces and stars” that will push the mobile money industry forward, she said. And the Obama administration “cares very deeply about this work,” and how it can advance U.S. policy priorities such as food security, combating corruption and fighting global poverty, she said.