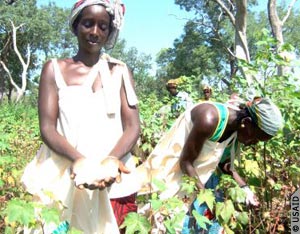 Washington — The ninth annual United States–Sub-Saharan Africa Trade and Economic Cooperation Forum, better known as the AGOA Forum, includes two new elements this year. When its ministerial session opens in Washington August 2, the forum will host a delegation of 34 African women entrepreneurs and convene a segment of the conference on agribusiness in Kansas City, Missouri.

Deputy Assistant Secretary of State for African Affairs William Fitzgerald sat down with America.gov to preview the event, which has as its theme “AGOA at 10: New Strategies for a Changing World.”

Fitzgerald said the August 2–3 session will be the usual type of AGOA meeting where ministers meet with U.S. officials to discuss agriculture, competitiveness, health and how to boost U.S.-Africa trade. “It will focus mainly on the policies related to trade,” he said.

On August 4, the venue will move to America’s heartland — the Midwestern city of Kansas City. “The goal behind going out to Kansas City is to have businesspeople talk to businesspeople,” Fitzgerald said. “We have the trade policy experts here in Washington talking about trade and then move to focus in Kansas City to where it all comes together. … The U.S. government will bring them together and then get out of the way and let the free market do the rest.”

“Most experts agree that for African economic growth to increase, they have got to step up in the agricultural field. Kansas City is a big agribusiness hub” for the United States, Fitzgerald said.

The Kansas City Board of Trade, which the delegates will visit, is where agricultural goods are traded, he explained.

African participants will spend two days there, meeting American business representatives ranging from farm-equipment producers to seed developers and sellers. They will also visit a local farm to see how technology has radically transformed the American farm, Fitzgerald said.

While subsistence farming will continue in Africa, he said, there is also an effort to promote larger commercial farming. Business delegates will visit a coffee roaster in Kansas City. “As you know, Kenya, Ethiopia and other African countries have taken advantage of shipping their arabica beans to the United States,” he said.

Focusing on the 34 women African entrepreneurs, Fitzgerald said, “There are a growing number of African women who are getting involved in business,” from soft drinks to banking to agriculture and trading.

“Even 20 to 25 years ago in Togo there were a lot of women in business who were referred to as ‘Nana Benz,’” he said. They gained that moniker, he said, because many drove Mercedes Benz automobiles after becoming wealthy selling fabric throughout the African continent.

“Women must have the opportunity just as much as the men do” to enter and prosper in business, Fitzgerald said. “These entrepreneurs are the ones who are going to drive job growth and economic development, just as small and medium-sized enterprises have done in the United States.”

AGOA has been a success as a trade preference program, but could be an even greater success if small and medium-sized businesses on both sides of the Atlantic become more involved under AGOA, Fitzgerald said.

Presently, oil and minerals make up some 95 percent of all imports to the United States from Africa under AGOA.

“Frankly, manufacturing, agriculture and other fields should make up a greater part of AGOA, so the U.S. government is devoting resources to capacity-building for the small-scale entrepreneur to be able to ramp-up and take greater advantage of AGOA,” Fitzgerald said.

To do this, he stressed, “Africans must free up their market economies. The regulatory frameworks and structural impediments seem to grow every year.”

“When we look at the sub-regional level, we have been impressed with the East African Community’s progress. They recently signed the latest common market agreement that will allow workers to secure employment regardless of their nationality,” Fitzgerald said.

“Exports need to start within the countries themselves, within Africa. It will give them the experience in developing markets, creating quality goods and turning a profit. The East African Community gets it.”

“The Economic Community of West African States [ECOWAS] gets it too and has approved a number of economic and commercial agreements, but they have not implemented many of them.”

Since 2006, Fitzgerald said, the U.S. government has offered commercial assistance to another sub-regional economic group, COMESA, the Common Market for Eastern and Southern Africa, and trade has increased 109 percent within that community. With U.S. technical assistance, the Kenyan port of Mombasa has streamlined operations, and the time to clear a container has dropped from 12 days to six.

Looking to the future, Fitzgerald said, the Obama administration clearly embraces the importance of entrepreneurship, having recently sponsored an international entrepreneurship conference in Washington.

Entrepreneurs are the engines and catalysts for growth, he said. For them to prosper, they need an open business environment free of bureaucracy and too many governmental regulations.

“We need to have a frank talk with the Africans — and I think that will happen — on how we can support them, following up on what President Obama said when he visited Accra a year ago.”

In a speech before the Ghanaian parliament in 2009, President Obama said the 21st century will be formed by what happens not only in Washington, Rome and Moscow but in Accra and Africa as well.