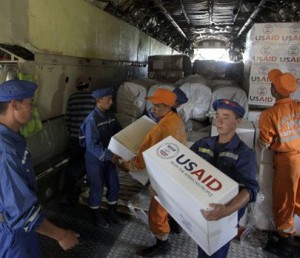 Donors’ Conference for the Kyrgyz Republic

Office of the Spokesman
Washington, DC

Today, at an international donors’ conference organized by the World Bank in Bishkek, Kyrgyz Republic, the United States announced a pledge of $48.6 million to assist the people and the government of the Kyrgyz Republic in meeting challenges presented by recent events. The total amount pledged by all donors represented at the conference was more than $1.1 billion. The total figure included U.S. planned bilateral assistance to the Kyrgyz Republic of $47 million in FY 2010 and $42 million requested for FY 2011 in addition to the newly pledged $48.6 million.

In the aftermath of the events of April 7, and in response to the tragic violence that occurred in the southern regions of the Kyrgyz Republic in early June, the United States has significantly expanded humanitarian, stabilization and technical assistance to both governmental and non-governmental organizations. Humanitarian assistance, valued at $4.1 million, provided by the United States to victims of April and June violence is in addition to the $48.6 million pledge.

The pledged funds will be directed to meeting immediate humanitarian needs, providing assistance to displaced and returning families, and addressing the roots of the conflict through community development and conflict mitigation programs in the southern regions of the Kyrgyz Republic. All funding provided by the United States will be closely aligned to needs identified in the recent World Bank Joint Economic Assessment. The U.S. pledge includes:

* $21 million for immediate expenditure by USAID for community improvement and stabilization projects, including a broad range of community defined projects that may include construction of small scale infrastructure, assistance to improve government operations, employment opportunities, and skills training for disenfranchised populations in the Kyrgyz Republic.

* $1 million from USAID to supplement supplies of fertilizers, fuel and other inputs this summer to help safeguard the fall harvest in the Kyrgyz Republic.

* $2.2 million to the International Committee for the Red Cross/Red Crescent (ICRC) for shelter and resettlement assistance.

* $1 million to the U.N. Children’s Fund (UNICEF) for protection, shelter and resettlement assistance.

* $500,000 to the U.N. Office for the Coordination of Humanitarian Affairs (OCHA) to support common objectives and priorities among humanitarian actors.

* $732,716 in USAID grants to NGOs to support economic recovery and market systems.

Instability in Kyrgyzstan: The International Response